I thought it was about time Groovement put a compilation together – the call was put out and many answered. I hope you love it as much as I do. Infinite thanks to all contributors. 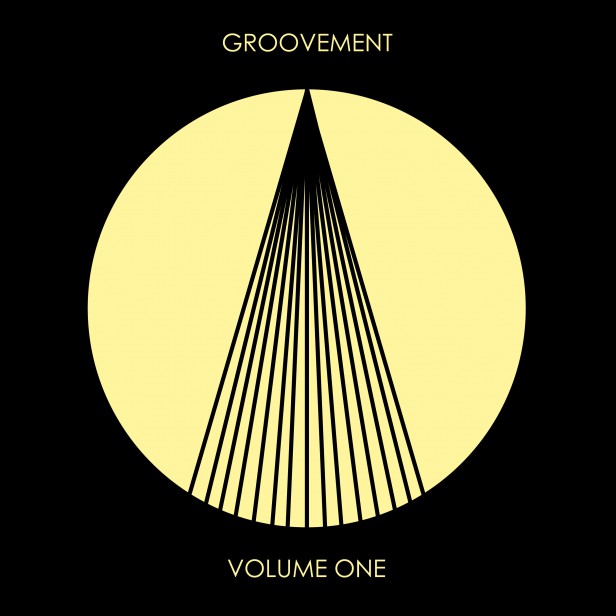 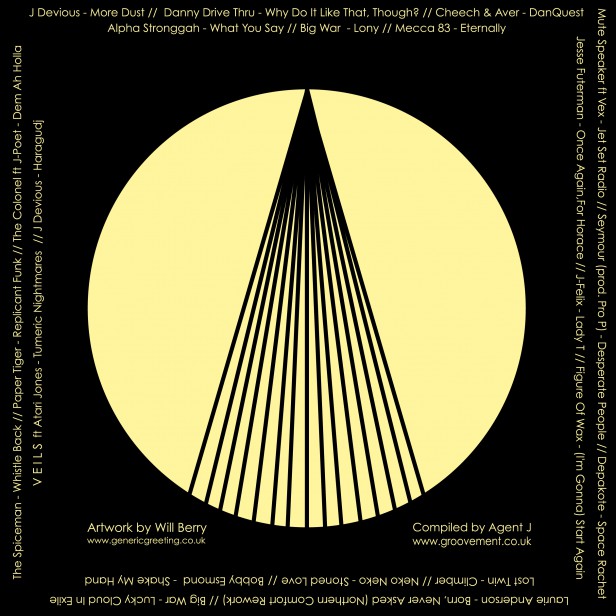 Compiled by Agent J
Artwork by Will Berry
www.genericgreeting.co.uk

Groovement // Volume One compiles music from some of the best underground beatmakers in the UK (and a few raps too), plus contributions from Santiago de Chile, California and Toronto. Compiled by Groovement’s Agent J (aka Jamie Groovement) and released as a free download on the fledgling LabelGroovement, it’s the first in an ongoing series.

Groovement is a website incorporating podcasts and interviews plus links to brand new music from independent artists. Past contributors to the Groovement podcast include the likes of Daedelus, Fingathing, Kutmah, Hoya Hoya and Scrimshire, plus Agent J has interviewed everyone from Ghostface Killah, Chali 2na and Angie Stone to Sharon Jones, Cody Chesnutt and Lee Fields for the site. Have a dig.

First off, thanks for downloading this compilation. I hope you enjoy it – it reflects some of the most creative and non-conformist music around, the sort of stuff you might find on the Groovement podcast and website. Below are some thoughts on each contribution. Groovement exists to push the work of others, so if you like what you hear, please hit people up on their respective networks using #groovementvol1. It goes without saying that this comp wouldn’t exist without the kind contributions of every artist below – thank you! Also a big shout to Will at Generic Greeting for our cover art.

DJ and producer James Cooper aka Coop hails from Buxton but kicks back in Brighton. More Dust and Hargudj are two of my favourite tracks of his, but there’s a hell of a lot more quality to come from this cheeky young scamp and it was damn hard to choose the tracks from those on offer!

Danny has been a staple of the Manc beat scene for over a decade, but isn’t as old as that makes him sound. Perhaps globally best know for his Virtua Ante Up track (included by Kutmah on a Stones Throw podcast and spun by the likes of Thom York at Low End Theory in LA), he’s had releases on Fat City Recordings and the Mind On Fire label. He’s currently readying his own crop of original releases. He’s also a total nerd and great turntablist (being half of Hot Vimto with G-Kut). Our eyes first met over his Optimus Prime hoodie at Sketch City, and we’ve been pals since.

Cheech is one of the cream of the crop of Manchester’s current underground rap explosion. He’s one third of The Bluntskins (together with Pro P and Bill Sykes) and part of the Mothership Connection, and is a true In The Loop (Groovement-affiliated hip hop night) trooper. If he’s not in the cypher, he’s on the dancefloor. Or lying on the stage, passed out. Aver is Joey Average, seen on lamposts everywhere as half of Dayse & Aver but most well known as the producer behind legendary Manchester crew TNC (The Natural Curriculum), who are about to see the long awaited debut album from rapper Chalk drop on wax.

It was Rob O’Hara (aka Mute Speaker) who first suggested the idea of a Groovement compilation a few months back, so props to him for this baby. His most recent release, Dripfeeders, was inspired by Jeff Noon’s 1993 novel Vurt, and you can grab it on his Bandcamp. Vex aka Vexation is the emcee for Sheffield’s Renegade Brass Band (and also member of experimental Sheffielders The Legend Of The 7 Black Tentacles), who are fast making a name for themselves given their storming live performances and recent Record Store Day release with Rodney P and Harleighblu on Tru Thoughts. I know him through the frankly amazing Thirsty Ear clubnight down at the Harley in Sheffield – shouts to Easty, Pablo and co.

Seymour hosts and co-ordinates community hip hop night Golden Egg in Manchester and is the rapper in Beatsum. His solo album is dropping soon and here’s a first taste of it, produced by one-man powerhouse Pro P (The Bluntskins).

Erik ‘Depakote’ Lopez is a man with an ear and heart for soul – I first heard of him as part of an Isaac Hayes tribute project he was involved with together with the likes of Mr Dibia$e back in the MySp*ce days. He’s a prolific worker, churning out releases as albums. His was the first release on LabelGroovement, the album Random, and he’s also released over at our pals’ label, This City Is Ours. His release The Gummo Album saw him reach wider acclaim and airplay from the likes of Mary Anne Hobbs on Radio 1 Experimental. He’s got lots more to come.

A few years back, Northern Comfort was the blog of choice for discerning Mancunians with a soul leaning – they also managed wicked nights down at The Salutation in Hulme, with heads like Mr Scruff and Illum Sphere spinning regularly. While the blog may be dormant (and in its current form is the hub for NC as a web design company), Rob Dobson is still very much alive and well and it’s an honour to have him contribute to the Groovement comp with this cheeky re-rub of Laurie Anderson’s Born, Never Asked.

Rich James, not to be confused with the Superbad Rick James, is part of the amazing Generic Greeting Collective (also see Will Berry, below) who DJs and produces under the moniker Big War. I’ve chosen two of his tracks to grace this compilation, and you’ll hear that they reflect two different aspects of his musical personality. Big War’s sound is what Groovement is all about for me – a refusal to be pigeonholed. I’m not afraid to say that Lucky Clouds… puts me in mind of the illustrious Delia Derbsyhire.

Oli Senior was a partner in the recently departed Sounddhism nights in Nottingham, and over the past year or so has been flexing his production muscles. His taste in music is impeccable – he’s a music fan first – and I look forward to hearing his future work.

Having released on Jus’Like Music and now Wah Wah 45s, Paper Tiger’s reputation continues to grow with their recent pairing with Homeboy Sandman of Stones Throw, The Sting. Although PT also takes the form of a full live band, it’s Greg Surmacz who steers the ship. I interviewed Greg a while back about the journey of Paper Tiger and he threw me a sick mix for the podcast. Listen to both of those here. Replicant Funk sounds like Deckard out on the tiles in Mega City One.

The Colonel is a long time friend from back home in Sheffield. I first came across him in a urinal in the former National Centre for Popular Music – or rather a poster for ‘The Shakedown’, explaining the mélange of sounds I was hearing coming from the DJ booth. It wasn’t until a while later that both he and partner in crime Johnty Del Monte came on the Groovement show on Unity Radio, and returned the favour several times by letting me loose on their own Sheffield based Shakedown radio show. The Colonel continues to DJ across the Steel City and rolls out bangers in his spare time, having released on the likes of Freestyle Records. He’s also a qualified industrial abseiler. Guesting on this joint is

Alpha Stronggah, aka Tecla de Oro, aka Baltazar Solar, is based in Santiago. My mum’s Chilean and it’s great to see that the underground music scene over there is as broad and strong as anywhere else – when she was young music by the likes of Victor Jara was being burned in the streets. I guess this is one of the reasons why it’s always been so important to me. Shouts also to Discos Pegaos, a label which seems to be central to much of this. I’m hoping at some point to get together a UK x Chile EP project off the ground, but that’s still in my head as yet. What You Say is a monster of a track, typical of this guy’s Godzilla attitude to beatmaking.

The Quincy Jones of the North West, as far as I’m concerned, and Evan even has the same surname. His most prominent release is the soul-dripped Life Sketches Vol 1 & 2 album, a statement of intent if ever there was one of straight up, honest hip hop instrumentals you wish you’d made yourself. He’s one quarter of the Alexis Davis Project and has worked with Von Pea of Tanya Morgan, Deborah Jordan, one of my all time heroes Jneiro Jarel, Kan Sano and Jesse Futerman. He first released under the name Rise on Futuristica Music and quickly earned himself a reputation as one to watch. Having recently welcomed a baby Mecca into the world, Evan’s letting that sink in before relaunching his Expansions Collective in September.

Introduced to me by Parisian MPC head Fulgeance, I’ve seen Jesse’s reputation grow exponentially over the past couple of years, and deservedly so. I’ve also had the pleasure of being in contact with him over that time, and know that one of his formative albums was Mr Scruff’s Keep It Unreal, which is a nice Manchester link. He’s recently released the final part of his free-to-download trilogy over at Jus’Like Music, and shown off a variety of moods and styles along the way. I believe he’s picking up the BPM pace a little for his next few releases. This one’s a tribute to pianist Horace Silver.

Joe Newman is another inhabitant of Brighton, perhaps the most prolific place to be as a beatmaker. He’s recently appeared on One Eye Wide Records’ Fragments Vol. 1 and the Tokyo Dawn release The Boogie Vol. 3 – grab his Green Light EP on Bandcamp.

My man Tom Speak has had a nice buzz about him the past year or so, and like all the heads on this compilation is more than capable in a range of styles. Another of the Buxton crew (see J Devious), so there was most certainly something in the (non-bottled) water…

Carlos R Pinto comes from Alcala de Guardaira, a suburb of Seville, but now resides in the much sunnier climes of Brighton. Climber is a creepy and quite forlorn piece – its chords hit me in all the right places. He’s released on First Word, Tru Thoughts and the forward-thinking A Future Without plus been part of RBMA this year. Everything on his Souncloud is sick.

One of those beatmakers that always pulls all the right strings for me, I first heard of Neko Neko around the time of his Orange Side Of The Moon project. He’s a well respected bloke and has had tunes out on the Mind On Fire and My First Moth labels. He has some great hats.

Usually seen onstage with Pete Cannon and Dr Syntax, Bobby Esmond has recently started carving out a niche of his own with the release of It’s Not What You Know… Bobby recently visited New York and fulfilled every geek’s dream by getting photos outside Ghostbusters HQ.

Simon Love has collaborated with the likes of San Fran’s Mad Flows and the ridiculous talent that is Alphabet’s Heaven, and I’m chuffed that we have an equally skilled partner present here in the form of Cleveland’s Atari Jones. Simon brings a murky near-close to the compilation with his typical sonic mastery.

Will is co-founder, illustrator and graphic designer at the Generic Greeting Collective, and I was very chuffed that he did the artwork for this release, because his stuff is sick. Generic Greeting is an amazing initiative for Manchester, check their stuff out below.