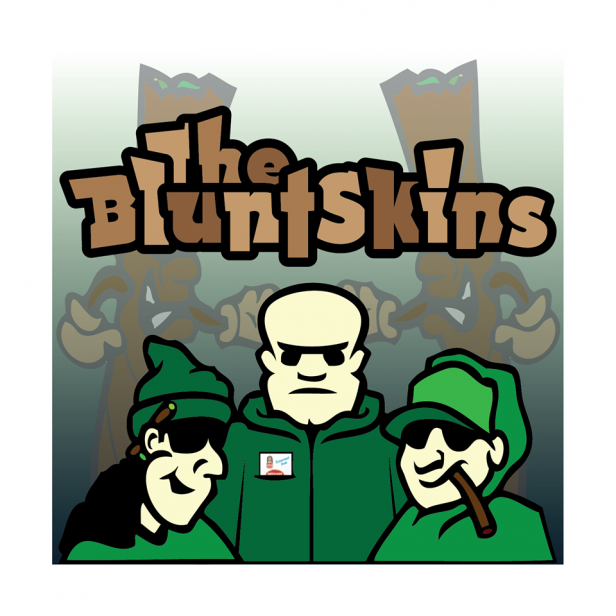 “It’s time to die, like the guy from the Green Mile” – Sykes

You’ll feel pretty lightheaded after listening… rappers Bill Sykes (TNC), Cheech (Mothership Connection) and producer Pro P are The Bluntskins, and today sees the physical and digital release of their eponymous debut album. It’s a proper album too, not a collection of unlinked tracks. You might be able to guess the over-riding theme that ties everything together, but whether you smoke or not this oozes soul and boom bap perfect for these weird summer evenings. It’s one of those with plenty of dialogue samples, but rather than distract or form daft skits Pro P’s used them to layer a narrative which keeps you interested. See Mellow Highs (below) for how nicely Pro P cuts up samples, too – some great hooks throughout this album. There are unashamed nods to hip hop titans throughout (Tribe, Dre), nice twists on familiar bits. Props to him then, deservedly looking like Morpheus from The Matrix in the cover art.

Sykes’ flow is always genius, bouncing you along and keeping you afloat, keeping you attentive with a permanent grin, while Cheech’s more laxadasical yet no less talented or rhythmic flow battles to space you out.

There’s also no overkill in the guests department, which could have been perfectly possible and understandable given how top quality the Manchester scene is.

Together with the recent Mouse Outfit release, this is another world-class hip hop outing from Manchester which should start to cement its new underground rep. Looking forward to more.