GROOVEMENT SPECTRORECTIVE 2009
Happy New Year etc! Twas beautiful round here (I write this 2 hours into 2010) with fireworks and lanterns filling the skies of Sheffield from all different directions. Good look.

It was with some trepidation that I started putting together a compilation to showcase some of the artists that have featured on the show this year: without the names below and a whole lot more, Groovement would not have grown the way it has. A humungous thank you to anyone and everyone who has uttered the magic word GROOVEMENT! in 2009 and helped us grow!

In the end I stopped worrying and just threw a load of ace tunes together. So it’s a look back at some of the artists that have crossed the drawbridge of Castle Groovement this year, with a hearty thanks to all! 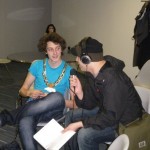 Skanky Skanky, T’s debut album, was launched to glowing praise from blog and broadsheet alike. Toddla has continued to swell and he’s ending 2009 on a jolly: he saw in Christmas Day on Radio 1 and plays Fabric for New Year’s. If he keeps on saving up he should be able to fund Park Hill flats’ resurrection single handedly. Groovement chatted to Toddla when he played Futuresonic at Urbis with Daedelus and Hudson Mohawke. Will publish that one in the New Year, but Keaney was on photo duties below.

>Crowhead / 8-Bit Disco (Atic)
The first of two tracks from Christian Wood AKA Woody AKA The Nudge AKA CROWHEAD on this compilation: Born With Teeth was the album, released on ATIC records out of the ashes of Grand Central, so to speak. Download the two glorious podcast below and be subject to an education in music and warmth from the man himself.

>Kidkanevil / Megajoy (First Word)
Title sums it all up really (as opposed to Master System Joy, which could have been an alt title for Mr Wood’s venture) – a blissful ode to video gaming of the old skool. Basho Basho, LP number three, is out imminently.

Thanks to Hoya Hoya links Daedelus has become somewhat of a Groovement regular. Check the links below – I don’t think I need to say how much he fulfills your image of a true gentleman. Always humble, always polite, always ready to entertain with his magician’s box of tricks. 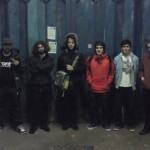 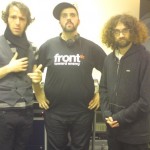 >Paul White / Burnt By The Sun (One Handed Music)

Speaking of blissful, the gently spoken Paul White rode ashore to visit Hoya Hoya (Illum Sphere and Jonny Dub’s club night in Manchester) and played a rare northern DJ set. The Strange Dreams of Paul White came out in a pillowcase, unfortunately sans any personal dribble from the man himself.

>Brackles / Get A Job (Apple Pips)
Sir Brackles of Hertfordshire skydived into Unity Towers for a midmonth Hoya one-off, showcasing his pioneering tunage in a show with Kidkanevil and Illum Sphere providing cover fire.

This seems to be the breakthrough tune from the Sphere, with the second EP it hails from not even physically released at time of writing. It’s been played on Radio 1 by underground Wonder Woman Mary Ann Hobbes and some other bloke and has a bassline to blow dry your cat with, sprinkled caringly with a most beautiful ice-cavey style melody and ending with a bloody phaser. Ace. Illum’s support of Groovement has been out of this world: half the guests I’ve had on just wouldn’t have come anywhere near without his help.

An interview where we talked about comics and animation, and I found out Fly Lo wasn’t too keen on Spider-Man. The Mint Lounge survived the aural assault on this night from his performance, but I’ve heard its structural integrity has been called into question owing to the PHATNESS of it. 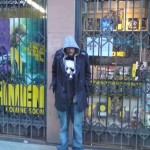 Non-compromising yet polite, deep yet manic, the GLK honoured Groovement with a big friendly chat about Manchester’s digging scene (Finders Keepers) and some insight into LA’s Low End Theory fallout.

A really dear friend of Groovement’s, DDThru is about to drop his Virtua version of Ante Up on Fat City’s PRODUCERS #2 album. Constantly at work on new beatage and pushing himself further, look out for more from Drive Thru in the coming months

A lot of heads picked up on this interview (ok, tweeted about) as revealing some of the origins of the LA beat scene. Ras is pretty forthcoming, pulling us into his own cosmos (especially impressive as we were in Illum Sphere’s very tidy bedroom). A nice accompaniment to the Fly Lo and GLK missives. 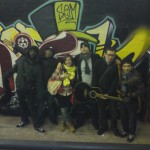 The Mouse Outfit, 8-headed funk monster with a hip hop tinge in the form of rappers Ragman and D Dot X, are spiralling towards wider recognition in 2009. Combining spiffing musicianship with lyrical dexterity, the Mice recently performed three songs live on Groovement and acted a selectas for the Christmas show.

Humble and reserved, Parisian powerhouse Onra has a lot coming up in 2010, most soonish a dub project which you can preview on his Soundcloud (from whence you can also hear the above Meth mash up by Dappa Dubs). Read more below! Massive big ups to MIND ON FIRE for getting him over. Good move. This track’s one of my favourite from 1.0.8. 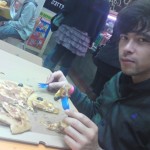 >Ghostface Killah and DOOM / Chinatown Wars
I think this joint (produced by Oh No) is from a GTA game of the same name, correct me if I’m wrong? Whatever, Ghost was personable and polite, willing to have a natter despite the pizza and groupies calling his name. My only concern was the lack of knowledge of the El Michels Affair, who Ghost had sampled for Musings to Myself and Shakey Dog featuring Lolita. 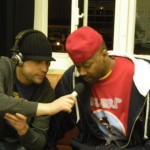 >Shape Of Broad Minds: Let’s Go (Lex Records)
What was meant to be a speedy transatlantic phone interview turned into an hour of viberian experience with the multi-talented and multi-faceted prince of his area, Jneiro Jarel aka Shape Of Broad Minds. This is an older track from the Broad Minds album rather than from the more recent Willie Isz LP, but it’s a monster.

The new boy when on tour early in March, Mayer was taking a break from band performances to spin some 45s at the Deaf Institute in Manchester. As lovely as you’d expect him to be. Last seen shaking his booty in that Snoop/Soulja Boy video. This is a sublime remix of the final track on his debut album, released as a B side to the single.

One for those that bought Toeachizown and are unsure where to go next, Sunset does it for me everytime. It oozes a number of things, not least the sun going down over the city as I drive along a warm windy road into nothingness… and I don’t even drive. If this was a drink, it would be a very expensive cocktail, ya dig? Dam’s been chosen as number 3 album of the year by Piccadilly Records, a great coup and good payback for masses of work he’s put into his music.

One of Rob Luis’ (Tru Thoughts) top tunes of the year, continuing the sublime tip and taking it to another level. Woody shines through in a bout of melancholia.

And for dessert… a 45 released by Italian label record kicks, independent of Gizelle’s own debut album release proper on Mocambo/Legere Records where she is backed up by the Mighty Mocambos. Gizelle appeared on one of the first editions of Groovement back in December 2007 and will certainly be jumping back on board upon their debut performances in early 2010. Classic funk with sassy attitude, June’s an emotive jumper-upper with a killer hook.

Band on the Wall was graced with a two-night residency of the SOUL incarnation of Jazzanova, with Detroit songbird (in a blokey sense) Paul Randolph layering on the lushness. This was one of the highlights of a set which really made me hear the power behind BOTW’s new sound system. Spine tingling.

A decade of Flying Lotus: free mix from the Gaslamp Killer