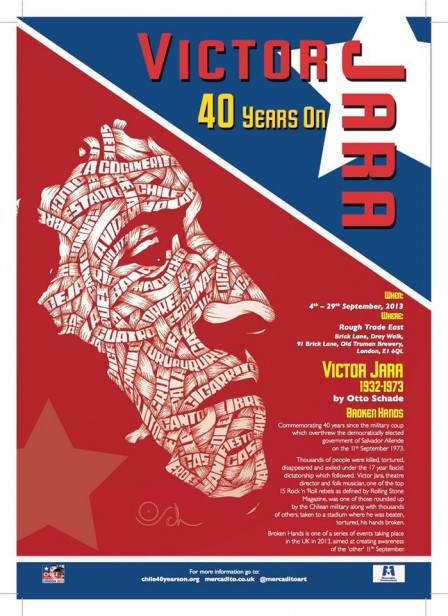 As you may or may not know as a reader of Groovement, I’m half Chilean. My mum escaped Pinochet’s regime in ’77, settling in the UK. 2013 is a bit of a landmark year for us.

September 11th marks 40 years since the coup in Chile which saw the death of Salvador Allende and the bloody installation of Pinochet as leader. A series of events in Sheffield, London and beyond are being co-ordinated by a dedicated site, Chile 40 Years On. 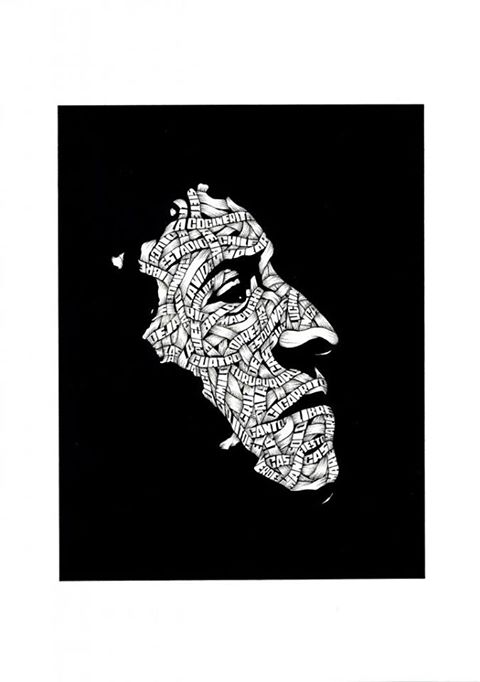 Broken Hands – this exhibition by Chilean-German artist Otto Schade looks at the life and work of Chilean singer-songwriter and theatre director, Victor Jara.

Jara was arrested by the Pinochet regime and taken to the infamous national football stadium used during the coup as a makeshift concentration camp, where he was brutally tortured and killed. It’s widely reported that throughout his ordeal he defiantly sang ‘we shall overcome’. His body was later found dumped on a Santiago pavement.

Joan Jara his British wife, buried him alone. His torture and murder became symbolic of the vicious regime.

The installation by Otto, whose work is heavily influenced by graffiti and street art, pays homage to a Chilean icon who has transcended generations. Otto explains ‘ I grew up in Chile during the Pinochet dictatorship,Victor Jara was an inspiration to those of us who were trying to understand what was happening . His lyrics had resonance, listening to his music was an act of rebellion. This year I heard about Victor Jara being named one of the 15 most controversial composers in history and I began to think about his influence. I was haunted by the tale that Jara’s hands were broken during his ordeal, that he was forced to sing with a guitar he couldn’t play because of his broken hands…hence the name of the show. I hope to bring to life something of his spirit and pay homage by creating this installation.

The exhibition is curated by Mercaditio Productions and takes place at Rough Trade East, London. Find out more info on the Facebook event here and the Rough Trade site. Otto is on Facebook.