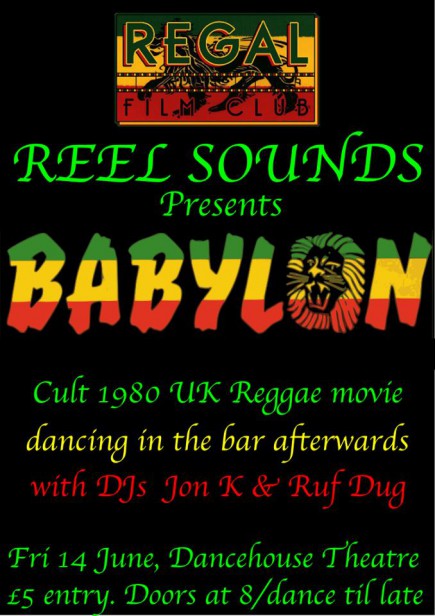 A night of film and music. Each ‘Reel Sounds’ event with screen a movie with a musical focus, accompanied by post-movie tunes.

at the Regal Film Club at the Dancehouse Theatre

“Our first night is on Friday June 14th – we are going to screen the film BABYLON, a gem from 1980 with a killer Dennis Bovell soundtrack featuring Yabby U, I Roy, Jah Shaka and Aswad.

Telling the story of Blue (Aswad lead singer Brinsley Forde) who by day works as a mechanic for a racist boss (played by Mel Smith!) but at night is a sound system deejay, Babylon captures late 70s/early 80s London and its vibes very neatly – part caper movie, part musical, part hard-hitting social commentary, BABYLON was for a long time a lost classic, only existing in the form of nth-generation VHS dubs, until a recent restoration saw it made available for a new audience, and so we are proudly able to bring you an opportunity to experience this fantastic movie in a full theatrical environment for one of the very first times in Manchester!

Join us before the screening for a drink in our fully licensed bar with DJs Jon K and Ruf Dug providing sound system vibes… after the film we’ll be keeping the bar open, turning some of the lights off and having a little dance til late… come along!”