C’MON FEET, Manchester hip hop night of a high calibre indeed, have some very big plans and would like some help. They’ve applied for the Umbro Industries bursary: please vote here! 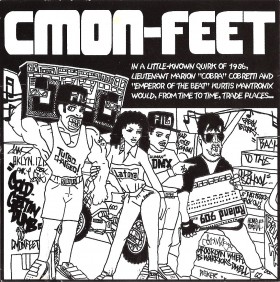 C’mon Feet run Manchester’s longest established Hip Hop night, however they are not “promoters” in the traditional sense of the word. C’mon Feet are Hip Hop enthusiasts who run on a not-for-profit basis, meaning that any money made at our events is put directly back into the night to bring a higher calibre of guests next time round.

We are seeking £2,000 for our 10th birthday celebrations and we plan to run two nights in October and December 2010 at one of our old stomping grounds ‘Band on the Wall’. Our aim is to keep the entrance fee as low as possible, making the events as accessible to as many people as possible, and also delivering top quality established international artists alongside up-and-coming local talent, all of which would be difficult without a bursary.

This will be our way of saying a massive thank you to everyone who has supported C’mon Feet and Manchester’s underground Hip hop scene over the last 10 years and more.

Should the nights be a success (and we strongly believe that they will be), we will use any profit to continue running C’mon Feet at Band on the Wall, standing by the principles that we have always kept about the way we feel a club night should run – C’mon Feet is all about community, no attitude and Hip Hop music being accessible to everyone.

Umbro will receive exclusive sponsorship of the events, with the Umbro name being used on 10,000 flyers and also posters. Umbro can provide us with their banners to advertise within the club, and also a radio advert to be aired on the C’mon Feet Elements Radioshow on Unity Radio (www.unityradio.fm). The station will be broadcasting on 92.8 FM across Manchester later this year.

History: C’mon Feet was set up in December 2000 at the Contact Theatre Deluxe Bar starting as a free monthly Sunday bar session. The nights were a success and built up a following, so we moved to Night & Day Bar in September 2001. Manchester debut’s for rising UK talent such as Task Force, Rodney P, Jehst, Shortee Blitz, Klashnekoff, Aspects, Tommy Evans and Dr Syntax followed, and also shows for international artists such as Masta Ace and DJ Vadim.

In October 2003, C’mon Feet moved to ‘Band on the Wall’ which felt like its natural home. During this time international artists such as J-Zone, D-Styles, Ricci Rucker, Prince Paul and Louis Logic passed through and also UK artists such as Woody, Ritchie Ruftone, the P Brothers, Tigerstyles and DJ MK. After Band on the Wall’s closure and a short break for C’mon Feet, the night restarted in October 2005 at the Mint Lounge, and guests included CraigG, Wordsworth, Pumpkinhead, Blakey, Genesis Elijah, Yungun, Mr Thing and the Dirty Diggers.

It then moved to the Roadhouse in 2007 for shows with the Foreign Beggars, Jack Flash and Wordsmith and C’mon Feet currently run a free pub session at Manchester institution “The Salutation”.