DJ Vadim is on tour pretty much 24/7 but this week he hits London and next week Manchester, so we thought it was high time for some Groovement questions to be fired his way. Enjoy… 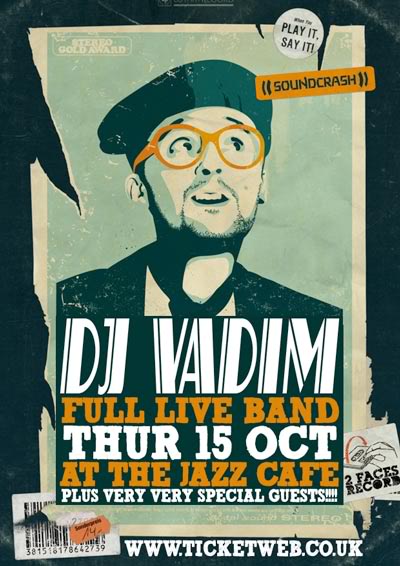 Hey Vadim: welcome to Groovement. How goes the current tour?
Yes, it’s going well. It’s a difficult time in the industry with recession, people losing jobs, uncertainty, dropping wages, house prices and all of that… a lot of people have great fear in their lives now…. so considering all of that and also the way people listen to music and entertainment in general, yes things are going well. Not superb but definitely not shit either!

Have you been happy with reactions to U Can’t Lurn Imaginashun?

Well, the press has gone pretty well, yes. I have very high standards, not only in how I make music but also in people’s responses. When people criticise the music I look at their points and see if there is truth in what they say…. but there is so much more… Am I happy with radio? No. Radio 1 didn’t really support anything. Yeah, some plays from Gilles Peterson and some other specialised shows but in general it didn’t cause a stir, yet every time I turn the radio on in the daytime I hear the same crap. I would say at least 50% of daytime music is total utter bollocks.

It’s not that I’m hating on ‘popular’ music. A good song is a good song. Oasis, Blur, Stereophonics, Maddona, U2, Coldplay have all had good songs, great songs in fact but most of what I hear on the radio isn’t great songs. I hear badly played instruments, singing out of tune, out of melody, no harmony, no dimension, no song, no lyrics… everything these days has been compressed and limited to just a loud noise. Everything sounds so similar whether it’s pop, hip hop, rock…. all these genres sound so similar sonically…. very few ‘pop’ groups are doing anything interesting or new…. if I hear another Arctic Monkeys or Kaiser Chiefs song I will smash my radio. Utter talentless drivel for a generation being raised in things that have no value. It’s like it’s symbolic of this fast paced ‘Hello magazine’ life we are going through.

Have you seen more sales on physical or digital formats?

I think it’s about the same digi to physical. I am sure that in the future it will be 90% digital. The life span of the CD is very limited…

How does the new live set up compare to your work with the Russian Percussion and One Self? The focus seems more on you this time.

Give us a rundown of who’s in the band.

Does the live set consist of mostly new material or are there reworkings of classic tracks too?

The show is a mix of old material from previous albums plus the new album and forthcoming stuff. Like a mix, and we do some kinda party rocking stuff for the crowd also….

Have you hit the Jazz Cafe before? It’s quite a legendary venue.

I played at Jazz Cafe before, as One Self in 2005 and as DJ Vadim. I also supported with Yara (Bravo) – Slum Village, Blackalicious, De La Soul there… it’s a great venue with a very international legendary name. A perfect venue for the Vadim sound then!!! Hahaahah.

Do you have a genuine love of touring or is it something you feel obliged to do? Would you rather stay in the studio and conjure up new beats?

Yes and no. Touring is an important tool of getting ones music out to the people. Unless you have million dollar videos and huge backing,you need to tour like crazy. Even pop artists do huge tours ‘cos it’s proven to increase sales and awareness of one’s artist… not only that in an industry where sales are going down the drain it’s one of the few avenues an artist can survive for thank God!!! Not only that, I find it quite inspirational to be on tour. I meet artists, hear new sounds and genres in different countries and some of these may end up on my next album…

You’ve been recognised as “one of the few artists creating genuinely new work in the hip hop field”. How important is it for you to be driving forward new styles within what you do?

Creativity is a very subjective thing. You can go to any artist’s website or myspace and see fans talk about how influential that artist is. How creative and how amazing. Of course I check other artists websites…. and it’s interesting. Just like how every film comes out and it’s supposed to be film of the year, explosive, amazing, thrilling, groundbreaking… all of this confuses the public because it’s not possible that everything is amazing… so I take comments with a pinch of salt. Of course I’m trying to be forward thinking. I don’t want to make some kinda throwback sound honouring a golden age in music. I don’t want to be some sort of sheep copying every hot sound and jumping on the next band wagon. I don’t want to be some sort of maverick that is so far ahead that unless you are an alien you won’t understand or like what i do… but I try to combine each of these. Something that is recognisable, something that sounds classic and something that sounds new. Program the music in new ways…

Who influences your production style?

I love DJ Premier, Timbaland, Dr Dre, Hi-Tek, Portishead, King Tubby, Roni Size, Ed Rush, the Roots, Erykah Badu etc… but I don’t want to just copy what they have done… I know some other producers who just straight jack peoples styles but then again there is only so long you can do that… and I’ve been here releasing for 15 years so I must be doing something right.

I remember back in ‘95 I used to play jungle at half speed. It was like dubstep now and some people looked at me strange… now I can’t stop hearing about this dubstep and that dubstep. The truth is, dubstep might be the big sound right now but give it 2 years and it will be dead. Those who disagree with me haven’t studied musical history. Look at drum n bass and jungle. Outside the UK, the scene has near enough collapsed. Everyone jumped ship to dubstep. So I am not about putting all my eggs in one basket. I incorporate a lot of sounds from different influences… this is more than hip hop or soul etc… In fact I would call this soultronica. The music I make. Because that’s the thing that joins the dots. It has to have soul. Whether it’s with raps, instrumental, big basslines, scratching etc… its got to have heart and soul…

Who else do you consider to be pushing and/or producing quality music? Who deserves to be heard?

That’s from the top of my head. I don’t know what’s in the water in New Zealand but they are straight slanging hot rocks…

You’ve experienced a lot in the past year or so, battling and overcoming health issues. Have you come out of it feeling rejuvenated? Have you found any new focuses?

In terms of my health, yes last year was a hard year. After I recovered from cancer, I felt I had a second chance at life. I felt rejuvenated,up beat… I felt and still do very inspired, in fact I honestly feel I’m on fire right now. I have so many thoughts in my head about music. I just don’t have enough time to do it all…