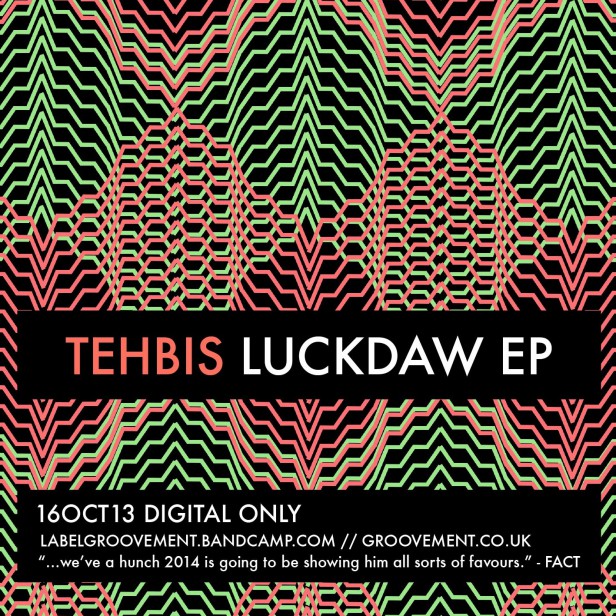 The  Tehbis EP is out tomorrow, but here’s a little taster out together by Jon1st.. (scroll down!)

Following releases from LA’s Depakote, Manchester’s Kuartz and the well-received Groovement // Volume One compilation featuring a plethora of beatmakers, LabelGroovement is extremely proud to present music from Tehbis as our fourth digital release.

London-based Tristan Williams, aka Tehbis, first came to wider attention with the inclusion of his track Higher on Kutmah’s 2012 Brownswood compilation, Worldwide Family Volume 2 – and Kutmah is a man of impeccable taste when it comes to beats. This led to Tehbis joining the big K on the much lauded Boiler Room twice: initially in April 2013 with Slugabed and Mo Kolours and again in June 2013 with fellow underground producers/DJs Esgar, Jo Def and Tim Parker. To top this off, in September FACT magazine named him as one of ten breaking producers to watch in 2014.

The Luckdaw EP (for in this day and age, 3 tracks doth indeed constitute an EP) sees Tehbis in full on stomper mode, with a little introspection thrown in for good measure. Opener Deww straight up slaps you in the face with a variety of sonic implements in its brief two minutes. With Saturday Cartoons Tehbis teams up with the don Kidkanevil to deliver a collaborative magic carpet ride smacker, while closer Bristol Way quickly builds up into a ridiculous riff that should mash up the club / living room with ease. All tracks are layered with Tehbis’ trademark offworld chords and carefully-unfettered drum snaps, with just a hint of sublime vocals to ground the sounds.

Nothing Leaves The Archive: John Peel’s collection in the spotlight for Mr Thing, Tall Black Guy, kidkanevil and Eric Lau