There’s been a hubbub of media attention over the Breaking Bad street art by Akse in Manchester over the past couple of weeks, with the artist contending with continual defacement of his work, seemingly by one persistent individual. Akse fixed the scratches and comments on the piece a couple of times, but yesterday saw paint being splashed over the portrait. His second Breaking Bad piece, DEA agent Hank, has also been amateurishly attacked as seen here  – a demonstration of a lack of understanding of the piece being obvious from the slogan ‘pushers out’ being scratched under his eye. Personally I hope we get a snap of this individual and that he becomes the focus of Akse’s next piece – but I’ll settle for Jesse. 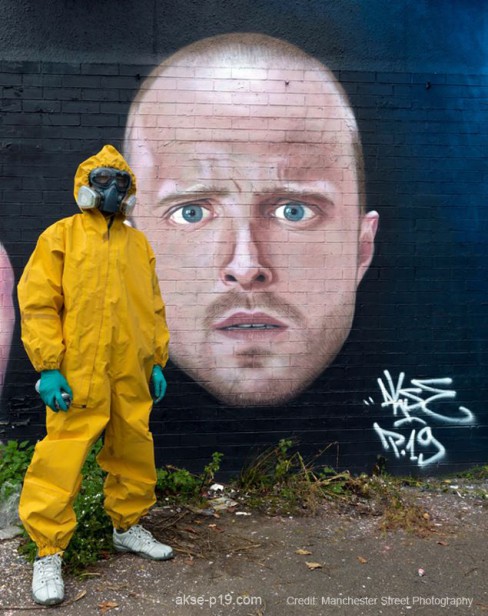 The objectives of Out House, who commissioned the original Heisenberg piece, were not to court controversy but to make Manchester beautiful. Read our interview with them on the link below.

Below that is a response from Benjamino, part of Out House, to anticipated complaints about the painting (this article in the Manchester Evening News was published a couple of days after the response). It’s in the form of an email to his Out House partner, but was so smashing I asked his permission to publish it. With the amount of inaccuracy and guess work out there about the piece, it’s nice to hear something from one of the horse’s mouths.  The wealth of comments on the Mancunian Matters site cement the fact that some people hate the piece, but Benjamino’s thoughts below argue a solid case. Right, I’m off to go and start up a money laundering car wash business.

An interview with Out House

So I have thoughts on the news that there have been complaints about Akse’s painting. I dunno if the M.E.N will ask us anything or if I’ll be able to be there if they do. Maybe I’ll write them a letter or something, I thought I’d jot down a rough idea for you now as I’ve been chatting about it most of the evening (in the pub, where all good philosophies and arguments are made).

So, the main complaint seems to be that people dislike the connection to crystal meth present in the artwork, especially in relation to the discovery of a ‘crystal meth lab’ on Tib Street in 2011.

Why is it a problem that a piece of artwork, executed on a wall on Tib Street, calls attention to, or rather makes reference to, an event in recent history that took place on the street on which the artwork is situated? It makes the artwork relevant to the area in which it resides! Is the problem that the painting calls attention the the ‘crystal meth lab’ itself, a black mark on the history of the street? Did the local paper not report the story? If the local press can speak about it, then why not a local artist? Or any artist? Or anyone?

Is the problem that it could glorify the drug? Well, anyone that has looked at it would see that it doesn’t. The actual reference to crystal meth is subtle and in no way makes it look glamorous, it only calls to attention the event of the discovery of the ‘lab’. There is also no recipe, no instruction on how to make the chemical compound, no kind of ‘call to action’ aimed at producers, pushers or users, nothing to encourage the manufacture or use of the chemical.

Is the problem the foregrounding, in the consciousness of the general public or the ‘man on the street’, of the this socially destructive drug? Well, unless you not only watch the TV show ‘Breaking Bad’ but also have knowledge of the history of the local area, then the connection would be lost on you. It is more of an in inside joke, a nod at a connection between local news events and popular culture, certainly not an in-your-face endorsement of recreational drug use. I’d think that if you hadn’t watched the show then you’d have to be a chemist to recognise the diagram of the chemical molecule of crystal meth, tucked away in the corner of the painting: even then, it wouldn’t be introducing you to anything you didn’t already know, opening your eyes to some dark underworld. The painting merely makes connections between things that you have to have previous knowledge of to even recognise.

The painting is a display of skill, dedication and passion, a pop-culture reference that entertains and excited those who share a love of the show, and a nod to local events that engages only those local residents who have enough awareness of what happens in their community, to make the connection.

Local residents, businesses and passers-by (along with a large section of the online community on Facebook, Twitter, Buzzfeed and various blogs plus, minutes before the time of writing, the NME) have enjoyed this piece of artwork; some tickled by the cross-referencing of television with local events, some only amazed by the show of artistic talent or by the beautifully rendered depiction of a face that they recognise.

So, what is the real problem? Maybe some people don’t like to be reminded of a place of ill-repute that happened to spring up in the area? I would advise these people to accept that what has happened, has happened, it is now a part of the folklore of the Northern Quarter and why should we hide from it? The Northern Quarter is, in fact, a largely run-down, dilapidated area of the city centre. It’s also home to a large number of bars, pubs, clubs, cafes, restaurants and other social hotspots, I suppose where there are people there will be some manifestation of an underbelly of society (which artists have chosen to depicted for hundreds of years). The Northern Quarter is also home to a large section of Manchester’s creative community, as is often the case in the more run-down, side-lined areas of a city. Therefore street art, or just plain old Art, is perfectly at home in this part of town. Maybe, just maybe, if there weren’t so many unused or abandoned buildings knocking around, or so many property owners sitting on derelict buildings that are literally falling down, waiting until the area gets regenerated and their properties become profitable; so many run-down empty shells and boarded up windows and doors on Tib Street and others, then there wouldn’t be the space for ‘drug labs’ to pop up, for crack dens to appear or drug dealers to slink away into spaces and sell these drugs to people. Surely this is the real problem, rather than some colourful marks on a wall?

Speaking on behalf of the Outhouse Project, I see it as our goal to try to put these places to some use, to help turn disregarded walls and buildings into canvasses to display the creative skills and ideas of the people of Manchester, rather than they be used as criminal hotspots or schemes to line the pockets of people who have no interest in the area or the community. People who will let the area fall into ruin, so that they can turn a profit after other people have done something to regenerate the area and make it a place where people want to go again. It makes sense that, in the process of handing these places over to peoples’ artistic expression, the artists will comment on and engage with the area itself, the place where they live and work.

Manchester has a large and diverse creative community, which includes the sometime accepted, sometime shunned black-sheep, “street art”. London makes room for theirs, a walk down Brick Lane or other such places will yield discoveries of artwork by Banksy (I’ve not even mentioned the Banksy piece beloved of many, placed on the same small building as the Akse painting) amongst many others. Brighton has a huge arena for them with Upfest being held annually and attracting artists and enthusiasts (of which there are a huge amount, just look at the amount of books, websites, fashion brands, galleries, publishers and films dedicated to it) from all around the country and even beyond.

I think Manchester has the pool of talent along with the suitable spaces to create a community platform to rival (or join, whatever) these cities, plus the immense murals and public artworks currently coming from all over Europe, the Americas and in fact, the rest of the world. We should take part, we should engage and match these artistic showcases. This project, and Akse’s ‘Breaking Bad’ artwork are a part of that, they’re not some crime glorifying, degenerating force, they’re part of an effort to make the community more vibrant and engaging.

I know that what people think about Akse’s painting is also a matter of taste, so if people just plain dislike it, then they have no need to fear, it’ll be painted over a month from now anyway!

I’m gonna stop now, this has turned into some kind of manifesto, 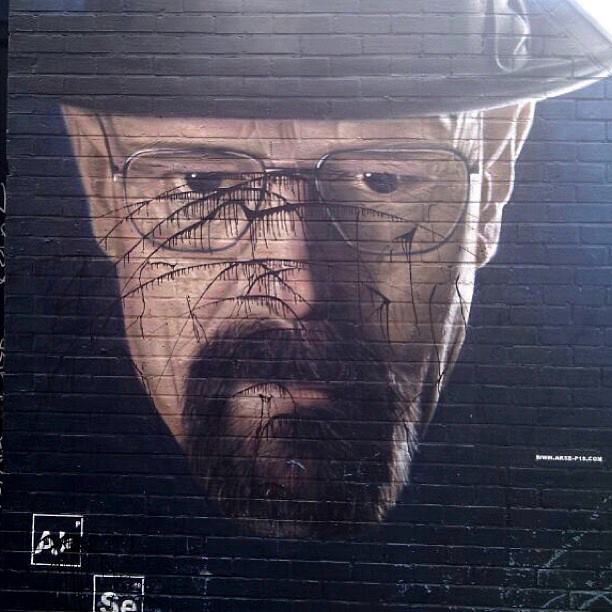