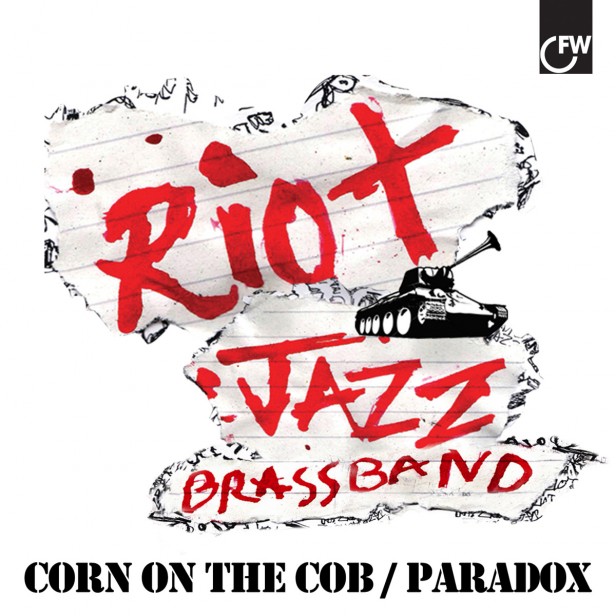 Riot Jazz enter Phase 2 (or possibly 22) of their bid for world domination with their debut physical release, a double sided 45 on the esteemed First Word Records. Known to Manchester since their inception in 2008 (and earning themselves a spiffing reputation on tour in the UK and Europe), their parties have seen a ridiculous standard of guests walk through various doors with the Riot Jazz band itself always the highlight of the night.

With their LP proper, Sousamaphone!, due out in summer, this 7″ acts as a sly introduction to the world at large to the RJ sound. Influenced in no small part by the revered New Orleans scene but peppered with (and surrounded by) influences ranging from the newest electronic Manc sounds to hip hop and funk, the live version of the band is often fronted by Chunky on MC duties, but it’s Nick Walters (trumpet) and Steve Pycroft (drums) who steer the band musically.

Side A, Corn On The Cob, reimagines the Godzilla refrain from Simon Says as the cast-pictured end credits to a Spaghetti Western, all snare drums and jump up madness. Relentless. The B side, Paradox, sees the band in a more reflective mood, building up an immense, listful riff over those powerhouse drums.

There’s a Riot Jazz x Groovement radio show in the bowels of the internet somewhere, celebrating their imminent-at-the-time first birthday with Foreign Beggars. Will have to dig that one out!