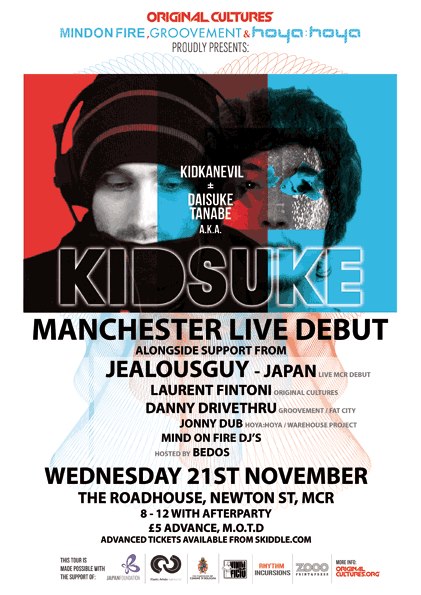 KIDSUKE  have embarked upon their European tour, to take in four countries, featuring Jealousguy amongst other guests. Laurent Fintoni’s Orginal Cultures project has brought Daisuke over to join Kidkanevil for their debut shows in support of the just-released album (have a listen below).

Hoya Hoya, Mind on Fire and Groovement have super-combined to bring the pair to Manchester’s Roadhouse on Wednesday 21 November. To big up the gig, find enclosed in this post an exclusive not-on-the-album Kidsuke track, an interview with Kidkanevil, and a mix from Laurent Fintoni. Enjoy – and if you like what you hear, please share.
Facebook event
Skiddle event (buy tickets)
Buy the album on Bandcamp

Hello, Kidkanevil. Could you sum your work up for people
who may not be familiar?
I make electro-acoustic ninja hippy beats music, rooted in hip-hop and a youth spent playing Megadrive and watching anime. I started off on more of a crate diggy thing, but now it’s more of a field recordy electronicy thing.
Please explain what/who Kidsuke is.
Kidsuke is me and Daisuke Tanabe forming like Voltron to make music.
How would you describe the sounds on the LP?
A lot of chimes and lazers and freaked animal sounds. It maybe looks to childhood a lot. We basically just made our own anime soundtrack.
How long have you known Daisuke? What’s special about his work?
I’ve been a geek fan of his music for a while, but we actually met as participants on Red Bull Music Academy in 2010. He’s one of my favourite producers, he has a uniqueness and an honest to his style that I really admire. His beats always have an emotional purpose as opposed to just being a banger or some trendy shit or whatever. I think Japanese musicians in general are more humble too, which I like. In the west a lot of our electronic music is more arrogant and aggressive I guess. Also he has a wonderful balance between organic and electronic elements in his music, which I love.
How did the initial idea for the collab come about?
We kinda clicked when we met, I think the idea started floating around pretty much straight away. We had a show together for Syndicate in Singapore and then I went to Japan for a bit and that’s when we started talking about it in a more serious way.
You’re known for a keen interest in Japanese culture –
when/how did this start and how does it currently manifest itself?
It started when I was pretty young actually, mainly through anime and computer games. As a kid in growing up in urban northern England I guess anime and Sega and samurai films have a magic to them, an otherworldliness that’s always stayed with me and continued to inspire. Funnily enough having been there as an adult it doesn’t feel any less that way, it really is an incredible place. You walk around Tokyo like ‘oh ok, so the anime wasn’t so far fetched after all’. But out in the country it’s like a Kurosawa scene. Which I guess is obvious if you’re Japanese but as an outsider it’s kinda amazing. Haha, maybe that’s like coming to the UK and being like ‘woooah it’s like a Ken Loach film!’
Would you say Kidsuke is more Voltron or Devastator?
Def Voltron, we’re on that positive tip.
What can we expect from the live shows?
I’m not sure yet, workinonit! Hopefully two laptops in perfect harmony! A lot of lazer sounds.
You’ve worked with First Word and now Project Mooncircle –
from both an artist and consumer point of view, what makes a
record company relevant in today’s climate?
I’m not sure, I guess with so much over saturation they can be good presenters of music to people. Mooncircle for example have a strong sense of who they are musically and aesthetically which I think you need. They know what they like and they get on with it, I respect that. I hate labels that fuck about, like there’s time for that in today’s world. I guess labels are very much tastemakers now. Like Flau are one of my favourite labels, I trust whatever they do is going to be a certain level of quality and share a particular vibe. Same with Black Acre, it works. I’m not particularly label minded as a fan of music though, I’ll dig for new music anywhere. But a great label is a beautiful and useful thing for sure.
What other British/Japanese collaborations need to happen?
Be as ridiculous as you want.
I’ll tell you one. When you visit the Ghibli museum in Tokyo one of the few other animation companies you’ll find in their shop are Aardman, which made me kinda proud. It’s like loads of Totoros and then suddenly a bunch of Wallace and Gromit stuff, haha. Now that would be a dope collaboration! How amazing would that be?
If you were to be particularly outlandish, what would
you demand on your rider at the Manchester show that would
make this the best date on the tour?
I wanna see all the Hoya guys in cosplay, aaaahahahhaha! Actually, I really don’t… o-O

Laurent Fintoni from Rhythm Incursions is behind Original Cultures, “a non-profit project that aims to facilitate and promote cultural exchange between Japan and European countries through the medium of modern performing arts”. The Kidsuke tour is a product of this.

Glassy, hi-end music box melodies meet clinical, clipped hip hop downbeats in 16 parts, alloyed with cute vocals from Cherry Chan and live percussions by Myele Manzanza on ‘Sgstep’, May Roosevelt’s theremin on ‘Ghostgirl’, and Gillian Wood’s piano on ‘The Last Train’, all together creating a distinctive and accomplished niche in their field.
– Boomkat.com

Listen to the album on Soundcloud