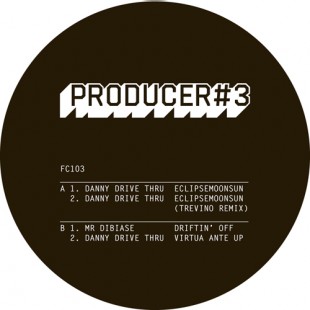 A1 DANNY DRIVE THRU // ElipseMoonSun

Listen
B2 DANNY DRIVE THRU // Virtua Ante Up

Fat City Recordings presents the next release in the Producer #3 series, featuring Danny Drive Thru (Manchester) and Mr Dibiase (LA).

The third part of our Producer#3 series.

Following his recent release on the Manchester based Mind On Fire label, Danny Drive Thru provides two tracks for Producer#3.

Marcus Intalex under his new Trevino alias remixes. In line with his recent tracks for Martyn’s 3024 label & Scuba’s DJ Kicks mix he pushes the tempo to create a technoid stepper. Its a dusky production in the 130 bpm realm with a warm electro flourish and darker acidic undercurrent.

After including his smash-up of the “death star theme” on Producer#2 and dropping his debut vinyl with the Cakeology E.P in 2010, the green llama aks Mr Dibiase returns once again to Fat City. Its classic Dibiase, all raw, chopped & loose around the lines, ripping apart some spaced soul parts in trademark wacked-out -cosmic fashion.

Danny Drive Thru finishes off with his cover of MOP’s “Ante Up”. Included on the Producer#2 cd, the repsonse was so good we had to do vinyl. Virtual voices mix with lo-fi keys and beats. Tongue-in-cheek, clever, funny & addictive.

Reach: THE ART OF CORRUPTION (MCR)