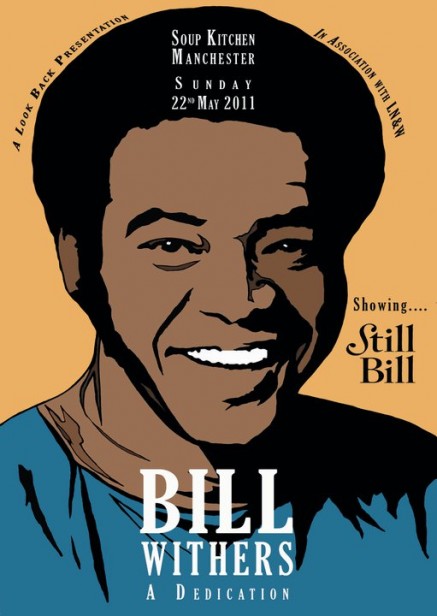 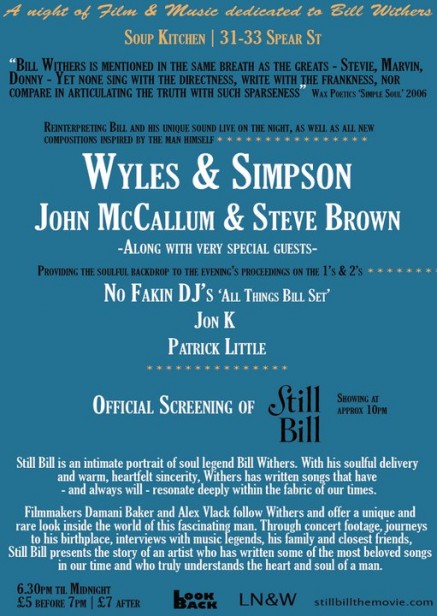 See the previous post for details on Wyles and Simpson who’ll be playing on the night.  Including an official screening of this film:

A music and film event, celebrating the legacy of one William Harrison “Bill” Withers, Jr……

“Bill Withers is mentioned in the same breath as the greats – Stevie, Marvin, Donny – yet none sing with the directness, write with the frankness, nor compare in articulating the truth with such sparseness.” Wax Poetics, “Simple Soul” April/May 2006

One of music’s most revered and respected artists, Bill Withers is a master songwriter and performer. His unique and poignant style, simple yet profound has moved many…. He is the true everyman artist.

Still Bill is an intimate portrait of soul legend Bill Withers, best known for his classics “Ain’t No Sunshine,” “Lean On Me,” “Lovely Day,” “Grandma’s Hands,” and “Just the Two of Us.” With his soulful delivery and warm, heartfelt sincerity, Withers has written the songs that have – and always will – resonate deeply within the fabric of our times.

Filmmakers Damani Baker and Alex Vlack follow Withers and offer a unique and rare look inside the world of this fascinating man. Through concert footage, journeys to his birthplace, interviews with music legends, his family and closest friends, Still Bill presents the story of an artist who has written some of the most beloved songs in our time and who truly understands the heart and soul of a man.

Providing the musical backdrop on the evening, reinterpreting Bill and his unique sound. As well as all new music inspired by Bill’s sound will be…

***Performing along with very special guests***

2 Turntables and a mixer duties fall to: