Download: I Need A Dollar (Live at some dinner table in Paris) via Stones Throw
Photos: Live in Amsterdam

I guess big things were expected of Aloe Blacc tonight; the cover of new album Good Things paints him as Mr Smooth Soul, and by his own admission his newly settled-on sound is pure Al Green. The crowd consisted of heads up on him since his first album and well aware of his hip hop background (Emanon, with Exile), to brand new converts brought on board by bonafide shouldbeahit I Need A Dollar.

The show kicked off with a full band workout in the traditional funk style, musicians warming up for what would be a 2 hour set which left loads of room for the occasional noodles like this intro.  Although the album was recorded with the El Michels Affair (at Stones Throw boss Peanut Butter Wolf’s request, having rejected what Aloe initially brought to him as being too commercial) and therefore distinctive in its sound, band for the tour The Grand Scheme go their own way with the tracks rather than try and reproduce recorded material.

Culminating in a tease of the Dollar refrain, Aloe strides onboard, as smooth as you’d expect. Involving the crowd from the moment he hits the stage, Aloe made clear his intentions: tonight was to be about the church of Love and Happiness, as founded by Reverend Green himself. This meant sharing the music as community and loving your fellow reveller. Kicking off with Are You Ready (from debut album Shine Through) and segueing into a hot band workout then medley, it’s not long before we have a big singalong for You Make Me Smile’s chorus.

I Need A Dollar, which may or may not be Aloe’s Smells Like Teen Spirit in the future with it being so catchy (Cobain occasionally refused to play the hit everyone wanted to hear), was given a reggae makeover after the second chorus, leading it into two covers: No Woman, No Cry and Walking on the Moon.

And here lay what for me (but not everyone else apparently, as the crowd kept rocking) was a downside to the gig – a plethora of covers littered the 2 hour set, the most debatable being a soul rework of Billie Jean. While nods to influences are always welcome, especially in the field of funk and soul, a bit of a karaoke/pub rock/Stars on 45 Megamix feel did start to rear its head at times (I refer you to snatches of California Dreaming and Green Day’s Basket Case).

I for one would rather hear more of the old material to make up the time – more of the hip hop vibe that used to permeate his material, and which he showed us briefly in the middle of the show (contextualising for those that might not know in the audience that he began as an MC). Aloe obviously wanted to deliver a solid, value for money, old fashioned SHOW for this UK tour, hence the 2 hour running time, and chose to bring in elements of familiarity to win over audiences, which is fair enough.

Anyway, THEN he done flipped it on its head – just as my pal DJ A-UP was muttering something about Soul Train (as is often the case), Aloe name checks that very show and demands the crowd split in half – suddenly we’re disco, brave males plunging into the spotlight to spin on ankles/drop to the floor – this being Manchester and not Chicago 1971, however, the funk soon descended into a drunken mess and the band brought the crowd together.

With the news that Aloe is signing to Sony, it will be interesting to see how this smooth soul sound develops, especially with more money being thrown at it.  Overall, a solid night’s entertainment driven by someone with clear passion for his work (and an unarguably excellent command of the stage), marred only by an over reliance on covers. My feeling is, though, that wherever he takes the tour, audiences will bloody well remember a good night. After the gig, Aloe was to be found signing vinyl down in the bar and chatting with punters with massive grins on their faces, spreading the love and happiness ‘til the very end. 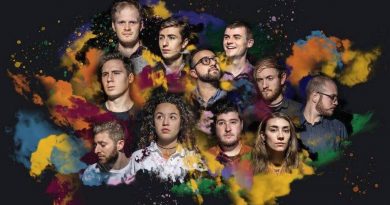