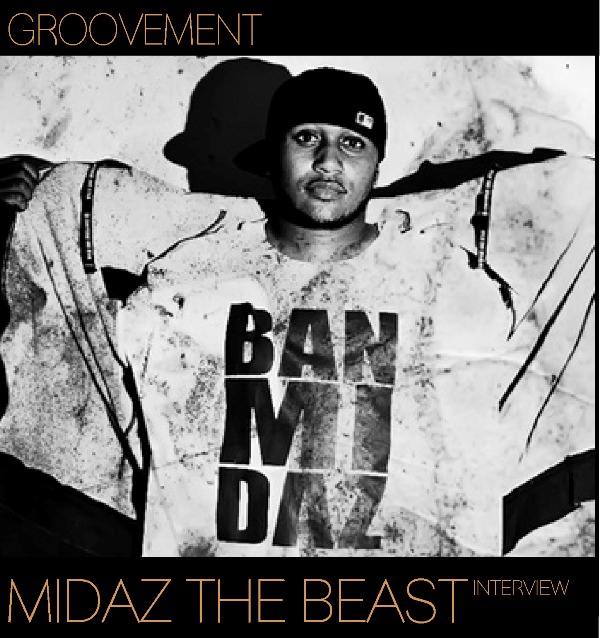 We’ve been following the movements of Florida-based rapper Midaz for a minute now; utilising a creative slant to his tunes through a concept-based approach and heavy use of Bandcamp has seen his message spread throughout the blogosphere. Here he presents an intricate and thoughtful persona, enlightening us to his world, which backs up his steely work ethic in anticipation of forthcoming debut album ‘Au‘. 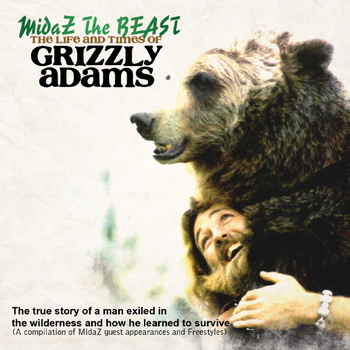 How goes life in Orlando?

Orlando life is good brother. Its hot as Hades around here this time of year, but nothing to complain about. Just working.

Is there an active and thriving hip hop scene there? How have you found it to change in the past few years? Have tastes varied?

Orlando has been proving itself to be a hotbed for underground hip hop talent man. A lot of cats are out here or have came from out here and the surrounding areas that are real emcees, and producers. Of course cats from my team, Doxside… IMAKEMADBEATS, TzariZM, Synopse, then you got 100k battle winner Murdoc, Mygrane Mcnastee, and you know Grind Time was started out here too. Plus a ton of other cats you may have heard of are from my hood. Sollilaquists of Sound, cRitical Madness, and more. So yeah… the scene out here is always poppin. For the most part the main change out here is faces…every season there’s a slew of new cats, and some of the older ones will fade out. But, tastes generally remain the same. 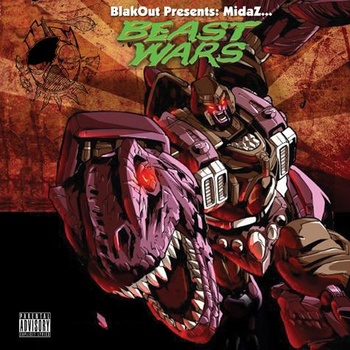 Can you give me some context on your identity? Is BlakOut your own crew? How long’s it been around?

I am MidaZ The BEAST. Formally known as Golden Child and Fastablade. Umm, basically i’m an emcee. Im a writer. I chose the name MidaZ because in my early days of rhyming, i was always enthralled with putting perfection on paper, lol, I didnt ever achieve that, but i always wanted to present a verse or a song like it was written with a golden pen. I wanted all my shit to seem pristine. The BEAST came later though. That was born out of feeling like i was iller than other cats man. I had (have) a philosophy that I try to just murder whomever im on a track with. LOL. Just some cocky emcee shit. BlakOut is just me and IMAKEMADBEATS. Thats my G right there, right hand man, whatever however you wanna say it. BlakOut started in 2002/2003, a little bit after the Golden StormZ days. IMAKEMADBEATS did all the production for the Golden StormZ project, and when GS fizzled out, I approached him about us doing music together. We both noted that we had a serious natural chemistry. So after just a few joints it was BlakOut for life.

Tell me a little about Doxside – is that a homegrown collective? In what ways does it give back to the community?

Doxside is the label, the team, the family. Definently homegrown. Basically we were a crew of artists that decided to take matters into our own hands as far as releasing our music. IMAKEMADBEATS, MidaZ The BEAST, TzariZM, Synopse, J Freedome, Butta Verses, Ponce De Beyond, and R.U.G.G.E.D.. Thats Doxside. Officially we havent started any community projects yet, being a new label and all, but we have been working in the orlando community for years. I specifically do a lot with children. I’ve volunteered to help middle and high school students with creative writing, and have done shows and organized shows for different schools and kids in our area. Its a blessing to be apart of things like that.

Your debut album Au is due next year: at what point in the process of making it are you up to? Who are you working with to complete it?

Ive recorded a lot of tracks for Au. Its been in the works since the winter of 08. I’ve done something like 50 joints so far for it. Just trying to keep recording until its time to push it out. We got a few things lined before Au drops. NightLight with IMAKEMADBEATS on production thats one half of a double lp with Butta Verses, El MidaZ live, BEAST Wars 2, a new MidaZ vs project, IMAKEMADBEATS album, and an album called Trilogy im doing with IMAKEMADBEATS and Beretta 9 of Killarmy. Its coming though trust. Its not gonna be like Detox or the Cure, lol. I got Beretta 9 on there, Sabac Red, Marco Polo, Oh No the Disrupt, Roc Marciano, Planet Asia, TzariZM, Murdoc… Mad heads on it in some form or other. Its some real hip hop shit man. Thats pretty much all ima say for now about it…lol. Its on its way tho. Keeps your eyes and ears peeled. 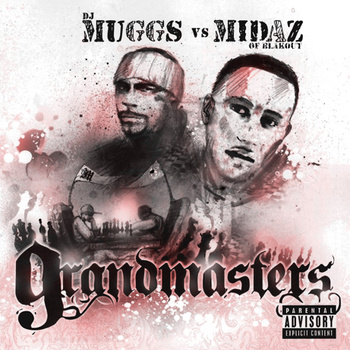 Is it important to release a full album in these digital days? Are mixtapes still relevant?

I’m old school in that sense. I totally believe in a full album. Thats the best way to present your work i think. Obviously with my track record, i believe mixtapes are relevant too. Especially as a way to prepare the audience for the aforementioned album. But i dont like the way mixtapes are presented currently…I think cats have to be more creative with their mixtapes. Make them a unique experience as well. Dont just grab 2 djs to host it and throw a bunch a of freestyles on there. Use your creativity.

The Life and Times of Grizzly Adams is a compilation of some of your work so far. Would it be fair to say you work hard at what you do because you love it? You seem to be much less ‘in your face’ on the promo side of things than many rappers might be.

I love it. Rhyming is a sport to me. Its like playing ball. Its my job no doubt, but its a labor of love. My favorite pastime. what did canibus say…”rhymin is the 9 to 5 that i manipulate best.” As far as promo goes, Im definitely anxious to get better known out there, but not by any means necessary. Im an emcee, and i want to be known as one. Not as a gimmick, or the guy with the cool videos, or tshirts and shit…i mean i wouldnt mind having some things that people know me for. But i want to be known as someone who writes dope ass songs. Period. 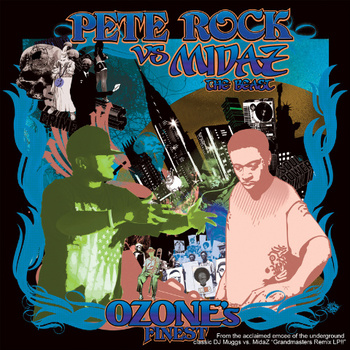 You’ve used Bandcamp to get your work out there and it’s popularity is growing – what are it’s benefits for you? What other tactics do rely on to let the world know Midaz is here?

Bandcamp is really fresh for indie heads to get music out there. Its good to have a hub where u can setup all your music at. And if you wanna release something yourself, heres an excellent way to do it where you reap the benefits yourself. As far as other tactics go, without letting mad shit out the bag, you gotta be an outgoing person. Thats it really. You as a musician are an entertainer, so having an entertaining personality helps people remember you when they see you. Thats the thing. Its not really about who sees, hears, or meets you… its about who remembers you after the fact.

What is the ‘our show’ radio element – is that BlackOut associated?

My man Conshus started OurShow a few years back and asked me to cohost it with him. Thats our radio show where we get a chance to put our flavors out there for the people to taste. Myself, IMAKEMADBEATS, TzariZM and Conshus are a collective called UJempire. So all our stuff is related. From Doxside to BlakOut to Ourshow, its one big ass family with different heads.

As far as hip hop goes in 2010, what do you consider quality? Is Drake doing it for you?

Really digging the Roc Marciano ‘Marcberg’ album. That shit is inspiring to me. Umm.. I like the Ruste Juxx and Marco Polo album. That shits hardbody. Anything Sean Price is doing. A lot of the new Raekwon stuff. Waiting for the new Madvillain stuff. Not really digging Drake too much. No problem there tho, hes cool and all. Just not my cup of tea.

How have you found promoting your work on the internet? Is it frustrating not to be able to push your stuff face to face?

It is frustrating on one end, but on the other its not. I like to get out in front of the people as much as possible. I’m a very active performer, but the net is the business nowadays. Its how you promote with zero dollars, when you cant get in front of the people. So you gotta respect the net and the people on it. Thats the way info is passed now, especially info on hip hop.

Have you found it hard to get people to see past their established tastes?

Umm… I think peoples established tastes help more than they hurt. The hurdle is getting them to LISTEN. Its a little easier to get them to do that when have something to compare you to. Like “i heard he sounds like some old busta rhymes shit…I like busta rhymes.” Nahmean? Their established tastes might be the thing that puts them on to u in the first place.

You a Thundercats/Transformers/Marvel fan? Detecting a definite comic style vibe going down there…

Ah man thats the basis of it all man. I’m a huge comic book fan, and cartoons and all that. BIG. So your def. gonna hear a lot of that influence in my stuff.

What grounding did Golden Stormz give you in the game? Who have you found to be your most reliable supporters?

GS is my brothers for life man. Jonny Storm killing dudes in Grind Time, Big June, Deafcon, and my man Shah. My first rap group. I wouldnt be the rhymer i am now without those dudes, so the love is ALWAYS there for them. PERIOD. GS till the grave my g. As far as supporters go. I think its just people who dig authentic hip hop music. Emceeing and classic production. Originality. People who appreciate that stuff are always the ones who approach me and show love. 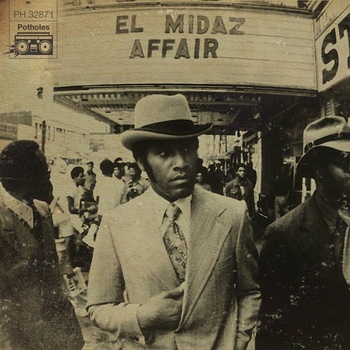 What is your next step? Will you remain based in Orlando?

Orlando is the base always, but our eyes are keen on expansion. The next step is pushing these project out there man. Continuing to try and build the fan base, and get cats familiar with MidaZ and Doxside. We got tons of product dropping this year and Au is def. one of those projects.

One thought on “Interview: GROOVEMENT X MidaZ the BEAST”