HIP HOP LEGENDS THE FURIOUS 5 ON UNITY RADIO THIS SUNDAY 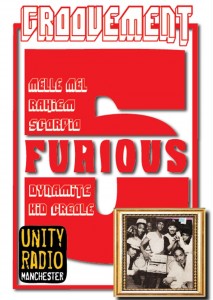 The FURIOUS 5 are touring the UK with KURTIS BLOW! Shuriken Media is behind the revue, and Unity Radio has an exclusive visit on the cards… 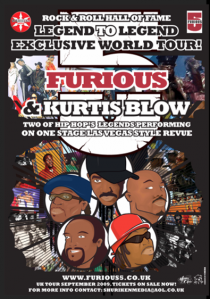 The second I saw the poster on the Mint Lounge door I knew I had to make a link and get the boys on the show – Unity Radio is proud to present THE FURIOUS FIVE.

YES – Melle Mel, Kid Creole, Rahiem, Scorpio and Dynamite will be in the building.
Scorpio of course guested on LADY JAY’s show last year showcasing his work with ChinaWhite.

The boys will be dropping into GROOVEMENT with Agent J this Sunday 23rd August, 4-6PM – a blazin’ Sunday afternoon with the BROKE ‘N’ ENGLISH show following at 6pm.

What’s that you say? ‘I’m not up on the Furious 5’? Let’s have the bio from the site and LEARN!

“The Furious 5 are a legendary group. They are trendsetters and are partly responsible for the creation of the billon dollar a year rap record industry, and the subculture called Hip Hop.

The Furious 5 are to Hip Hop what the Rolling Stones are to rock. As members of Grandmaster Flash & The Furious 5, they have toured the world with the likes of U2, The Police, Clash, Prince & Duran Duran as well as many Hip Hop greats. Their recordings are amongst the most sampled in the history of recorded Hip Hop, and some of their works from before Hip Hop was recorded have been copied and mimicked.

It was these guys who made the name Grandmaster Flash & The Furious 5 a household name on the strength of records like Freedom, The Message, White Lines, Superrappin, Beat Street ,New York , New York, Survival , Scorpio and Larry’s Dance Theme to name a few…”

Get all the news on the upcoming tour by linking up on the OFFICIAL site www.furious5.co.uk and get yourself to a date – Manchester is Wednesday 23rd September at the Mint Lounge with support from CHINAWHITE, DJ DEEP D and RED VENOM & DJ POZ.

The show will be podcast on groovement.co.uk following the broadcast, check the site for recent interviews with GHOSTFACE, GASLAMP KILLER and FLYING LOTUS to name a few.

See you then – holla for shouts from the 5 at [email protected] ! Big up Shuriken Media for sorting the slot!