Furious Five interview! With a cameo from Kurtis Blow…

A five way phone conversation to preview the upcoming UK tour… as Unity Radio, home of Groovement, is based in Manchester we’re focusing on the Mint Lounge show **23rd September 2009 folks** – I’ll be hooking up with the Five and Blow in physical form upon landing, but for now we shoot the shizzle about the tour, truths and more. 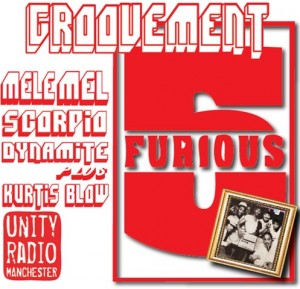 Tunes:
The funk version of the message was premiered on Groovement way back in December 2007: a limited 45 by Mighty Mo and the Winchester 7. Kenny Dope heard the track and remixed it for his Kay Dee label, revealing the true artistes behind the tune: the Mocambo Allstars.

Danny Drive Thru manned the decks for the show and it’s his rework of the Message you can hear at the end of the interview. Check out his other work.

Groovement is 2! 2une in on Sunday…