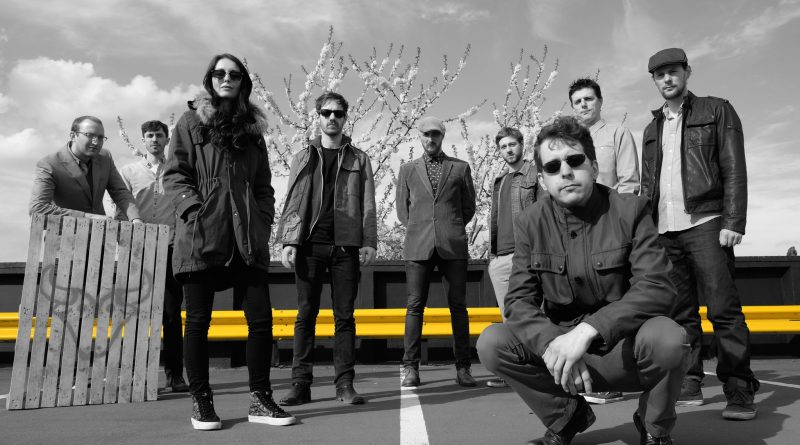 Buffalo Brothers are an exciting, nine piece funk outfit from Manchester. The talented group have collaborated with some of the region’s finest musicians, and rocked stages throughout the UK with their explosive sound.

From humble beginnings in a local bar, the band have sold records around the world, and won fans such as Craig Charles and Huey Morgan. Despite the current disruption to the music industry, Buffalo Brothers released their new single J Odyssey during lockdown. With more releases and collaborations to follow, Buffalo Brothers are more ready than ever.

You released your new single J Odyssey in May. What was the inspiration behind this?

Joe S (Trombone) “Our trumpet player, Chris, who is featured on the track playing flugelhorn, came up with the main melody and brought it to the band. Chris lives in Shrewsbury whereas the rest of us are based in Manchester, so he’s already had plenty of experience in collaborating remotely like this before the lockdown forced the rest of us to adapt.”

Ian Findlay helped to create a fun video for the track during lockdown. What was it like working remotely like that?

Tim (drums) “Working remotely was fun! Getting together during lockdown has been impossible, so getting to record our own video parts and then see the final product come together was exciting! Ian did a great job at working independently and producing a video we are all happy with. It’s not easy to please all nine of us!

Joe S “May I just add that Ian’s been a great friend and help to the band over many years. He is a well respected professional in the world of film and television with a very impressive CV. You can find out more and enlist his services at www.ianfindlay.tv .”

How have you been coping as a band during lockdown? Have you missed playing together?

Simon (baritone sax) “It’s been a strange period in so many ways being in lockdown. Normally we see each other a fair bit to either  write material, rehearse, socialise or, of course, gig together. Although we’ve collaboratively organised our video recording and been in touch to discuss things here and there, I think it’s fair to say we are all looking forward to getting in the same room and playing together as soon as circumstances allow.”

Obviously the music industry has taken a big hit due to coronavirus. How can people support artists and venues?

Rachel (percussion) “It most definitely has taken a huge hit! In the hope that there are still venues to go back to, there are some things in the meantime that are a huge support to us and other musicians.

“Promoting independent music on whichever social platform you use is always a positive move. Involve yourself in live-streams of performances which may benefit musicians in a monetary way. Buy records! (Directly from bands where possible.) Refrain from using platforms like Spotify and iTunes which do not fairly divide profits to the musicians, and instead, opt for using musician friendly organisations such as Bandcamp.

“Don’t forget the necessity of engagement in live music, nor the importance and power it has for people’s well being. We must live in hope that this is a momentary collapse.

“For me, the biggest help would be to acknowledge the injustices brought about by this government. Not only to the music sector, but to so many of the most vulnerable. Entire careers gone, a mass of culture left to dissolve with barely any acknowledgement let alone financial aid. There are many online petitions which have proven to be of some help when signed and shared, whether it be in favour of saving venues across the UK or pushing for the self employed in the arts to be helped like those furloughed.

“We are the largest and yet one of the very few sectors with no time frame of when we can earn again, and with extremely limited help put in place. We want to live in hope that we can go back to our hard earned careers, and for the love of God, don’t vote for a government whose priorities are to maintain a hierarchy of wealth even when that puts millions under the poverty line. We are the 99% after all.”

What do you envisage for the future of music in light of the pandemic?

Joe S “It is reassuring that we’re beginning to see some green shoots of recovery with outdoor performances and now the go ahead for some small scale indoor events. It is hard to predict if live music will ever be the same as it was before, let alone when. I think that there is a very real danger that losing venues and jobs within all of the entertainment industry’s vital services will leave the landscape irrevocably changed.

“The advent of streaming services over the last few decades has meant that recording and releasing music is no longer a particularly profitable endeavour and so there’s been a shift to artists making most of their income from live performance. If we are to lose that as a viable option as well then who knows what the future will be. We’re already starting to see a lot more ticketed live stream events so I guess that’s going to become a regular thing, once everyone’s invested the last of their savings on the necessary technology.”

What have you been listening to in order to keep things lively?

Justin (keys) “Wheels On The Bus, Wind the Bobbin Up, Shotgun…all the classics. When I want to attempt sanity I’ve been putting on Alabaster Deplume.”

Joe S “There’s a Colin Hay tune that really calms my toddler down. I’ve streamed it so much he’s probably been able to buy a new house with the royalties. I’ve also been enjoying Ben Williams who’s been writing and recording a song a day for a month, and Jon Kenzie’s live streamed gigs.”

Are there any gigs that you’re feeling particularly nostalgic about at the moment?

Joe S “I think we’re all agreed that the gigs we’re missing most at the    moment are the ones we’ve done at Dulcimer in Chorlton. Partly because that’s where the band started and is very much our spiritual home, but also because that type of intimate, crowded (sweaty) gig is the sort that isn’t going to be allowed to happen for some time yet, even after outdoor and socially distanced gigs become more commonplace.”

How is the band managing to push forward despite the current restrictions?

Joe S “We’re keeping in touch and putting some time into the less glamorous aspects of being in a band, like admin and finances, but we’re still sharing musical ideas with each other. Quite early in lockdown we made sure that we’ve all got the same audio software and set up a shared drive so we can easily work on ideas together. It’s absolutely no substitute for properly playing together in the same place though of course.”

You’ve got some new material up your sleeves. What can people  expect from your new stuff?

Joe S “We do indeed. We recorded quite a bit of stuff when we were last inthe studio, which was thankfully when it was a lot simpler to do such things. We have what we hope is a good selection of instrumentals and some vocals which were co-written with and feature our favourite singers. The variety of creative influences means that they cover quite a broad stylistic spectrum, but all with the Buffalo Brothers’ stamp firmly on them. We’ll keep releasing them one at a time for a while, so make sure you’re following our social media channels and bookmark any websites so you don’t miss any.”

You worked with vocalist Hayley Williams on the funky track “Those Good Old Days.” What was it like working with her?

Simon “We really enjoyed working with Hayley Williams on Those Good Old Days.

We all know Hayley very well – she is a great friend of the band. Members of the band have worked with her over the years on various different projects. It was lovely to get together and spend time crafting a track which we are all really proud of.”

Joe S “We’re really lucky that Hayley had the time to work with us – she’s  one of the busiest people in the business at the moment doing lots  of exciting things. You can check out one of her projects with Manchester singer and song writing legend Ben Williams here:”

There are plans in the pipeline to work with Carl Cox and Eric Powell on their Mobile Disco Funk Connection Project. Can you  tell me about this?

Joe S “We’ve actually already made a track with these guys. Carl and  Eric are big fans of funk and soul and have been putting on their Mobile  Disco parties in Australia (where they both now live,) for the last decade  or so. They decided to make an album with some of their favourite  (and our favourite) artists in the genre.

“We are absolutely honoured that  Eric approached us to be part of it after discovering our first album  ‘Fresh From the Horn’ on Bandcamp and arranging to meet with us while visiting family in Manchester. The album isn’t going to be released until it’s safe to be toured live, so we unfortunately don’t have  a date on that yet. It’s exciting that it’s ready to go.”

What are the band’s dreams for the future?

Joe S “ We’ve been so lucky already to have done things we only  dreamed of- opening Manchester Jazz Festival was a highlight, as  well as getting our first BBC radio play from Craig Charles and playing at a few of his legendary Funk and Soul club nights. I hope we can  keep doing more of the same for a long time.”

Keep up to date with news from the band on their website, and buy music from their Bandcamp.