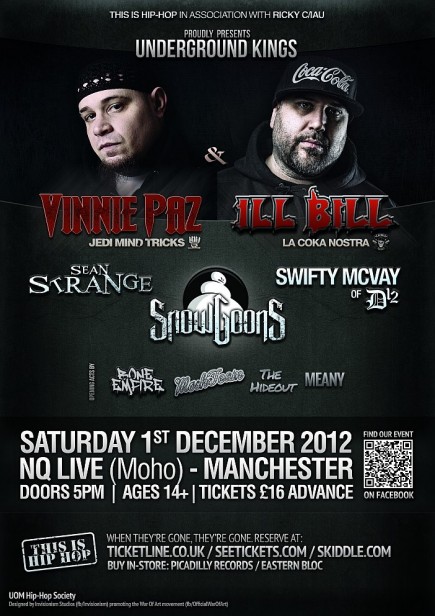 Having brought Immortal Technique our way last week, This Is Hip Hop return with another strong show on December 1st.

“For one night only, Underground Kings brings some of the most powerful forces in independent hip hop together in one venue  – for what’s set to be a supercharged, super hard night of beats and rhymes.

Topping the bill are two of the most powerful forces in independent Hip Hop; Vinnie Paz of Jedi Mind Tricks and La Coka Nostra’s Ill Bill.

Joining them will be founding members of  D12 and the Snowgoons Dynasty; Snowgoons, Swifty McVay and Sean Strange.

It’s a colossal line-up of extraordinary talent, and one which is sure to reach the darkest, grimiest depths of hip-hop with heavy beats, rugged rhymes and intricate lyricism.