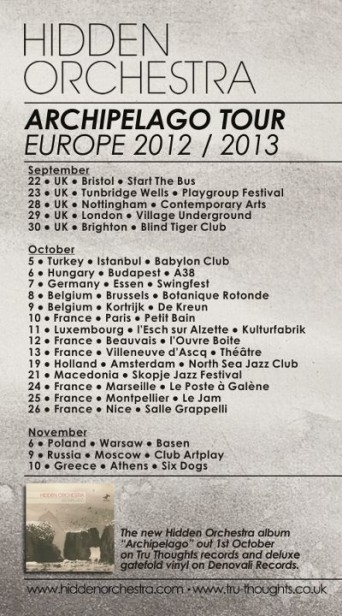 There’s an album launch party in London on 29 Sep  – keep an eye on Groovement for the chance to win a couple of guest list and a new interview with Hidden Orchestra.

Groovement caught up with the Hiddens last time they hit Manchester:

The core quartet of Hidden Orchestra is formed around the duelling drum kits, percussion and electronic pads of two drummers, Tim Lane and Jamie Graham, completed by Poppy Ackroyd’s distinctive, multi-faceted violin and piano playing and Joe Acheson’s bass and original samples. Hidden Orchestrahave seen their star rise steadily and emphatically since the release of their debut, with an organic buzz building as they have toured their highly in-demand live show almost non-stop through over 20 countries, in addition to tour support stints for the likes of Bonobo.

‘Archipelago’ sees Acheson, the musical mastermind behind the talented Edinburgh four-piece, continuing to explore and develop many themes that emerged on their debut, adding new ideas, guest players, instruments and found sounds; to name a few, listen up for tap-dancing, bagpipe drones, and Acheson stomping in snow and ice.
One track from ‘Archipelago’ made its way out of the studio on an EP last November: “Flight” (which has notched up 700,000 Soundcloud plays) gained heavy BBC 6Music play from Cerys Matthews (who also invited the band for a live session) and Huey Morgan, as well as Jamie Cullum (BBC R2), Gilles Peterson (then BBC R1), Late Junction (BBC R3), John Kennedy (XFM) and more. The eagle-eared may also have spotted the burgeoning new material in Acheson’s mixtapes – a series of elaborate studio creations giving an insight into his eclectic influences and singular musical sensibility, each gaining tens of thousands of hits. The first official single from ‘Archipelago’ will be the double A-side “Vorka”/”Spoken”, to be released on 10th September, with “Vorka” premiered on The Line Of Best Fit on 18th July.

New instruments contributing to the many layers of ‘Archipelago’ include the musical saw of multi-skilled cellist Su-a Lee (as heard to spine-tingling, sci-fi effect on “Vorka”); clarsach and electro-harp from Scottish folk musician Mary MacMaster; clarinet care of Czech musician/composer Floex; and Phil Cardwell’s uniquely versatile trumpet tones. In addition, you’ll hear a range of kantele and zithers which Acheson (also a Sony-nominated radio producer and presenter) found and recorded at a school for the blind in Finland, while on location for a radio documentary.

In sampling found sounds and inspired improvisation, alongside his skills as a composer, Acheson instils in the music of Hidden Orchestra an anchor to its earthly environment, while often conjuring an ethereal atmosphere and fragility that can whisk the listener off to another world; there are moments of feeling suspended somewhere in between. Just as the first album evoked, in Acheson’s words, “the brooding reflections of a solitary walk through the still, restless night”, ‘Archipelago’ takes us on “a voyage around a group of islands – built from the same materials but each with its own character, its particular arrangement of rocks, shoreline, flora and fauna – amid seas and skies which are forever changing”. Acheson captured bird and wave sounds on a boat and ashore on the tiny remote Scottish island North Rona, when he and Poppy accompanied her father, the artist Norman Ackroyd, on a trip to gather sketches for his etchings – including the one of nearby island Roaireim, which they used on the album cover.

Recent high points for Hidden Orchestra include performing on the West Holts stage at Glastonbury 2011 with a special ten-piece line-up; selling out their biggest London headline yet; and playing their first shows in Africa and Scandinavia. But for Acheson, who toiled for many years to see the first album come to fruition, there have been no lows, just excitement and awe that his intense, drawn out labours – “practically living in the studio, eating porridge and soup, never getting to go anywhere” – have begun to bear fruit. Hidden Orchestra now have a busy festival season ahead before setting off to tour the ‘Archipelago’ album in earnest in Autumn.