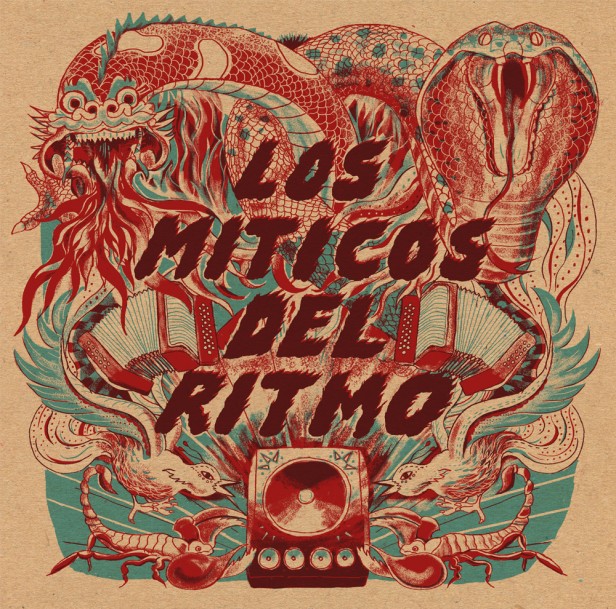 From the sweltering tropical depths of Cali, Colombia Will ‘Quantic’ Holland’s studio band Los Miticos Del Ritmo (The Mythics of Rhythm) return with an album of hip shaking, dancefloor quaking instrumental cumbias. Released on CD, LP and download on the 30th April. The LP is 100% analogue and comes with an original screen-printed front cover designed by the London based artist Lewis Heriz.

Covers of Queen’s ‘Another One Bites The Dust’, Michael Jackson’s ‘Don’t Stop’, The Abyssinians reggae classic ‘Satta Massagana’ and Gildardo Montoya’s ‘Fabiola’ (as featured on Soundway’s ‘The Original Sound of Cumbia’ sit along side original cumbias on this feel good, house party cumbia LP.

Recorded in Will’s home studio in Cali, his approach was to produce an album with the aesthetics of 1960s tropical recordings made in Colombia and the Caribbean. Careful attention made to preserve the analogue quality of the recording at every stage.

‘The idea of the record was to record something that sounded like a lost cumbia classic,’ said Will in a recent interview with Soundway ‘Like something dug out of a Barranquilla basement after decades of humidity and dust. In a modern climate of mashups and sampling, it seemed refreshing to record something with musicians doing covers and approaching new ideas for cumbia, rather than rehashing old tricks.’

The record was recorded entirely on 4 track tape, using a process of overdubs and tape transfers to record multiple sessions at different times with different musicians. As Holland began to play the dub plates of the project in his DJ sets around the world, tracks like ‘Cumbia de Mochilla’ and ‘Another one Bites the Dust’ slowly became sure-fire dancefloor winners.

Since moving to Colombia in 2007 Will has slowly immersed himself in the musical history of the country. The much acclaimed ‘The Original Sound of Cumbia’, a 55 track compilation of Colombian cumbia and porro released on Soundway in 2011, was the result of five years of field research from Will. Simply finding and compiling old records is not however in Will’s DNA. The research is more an education for Quantic the musician who has been learning accordion for close to five years now, even taking lessons from Colombian and Panamanian accordion masters such as Anibal Velasquez and Papi Brandao.

Los Miticos Del Ritmo sees Will as an accordionist for an entire long player for the first time and must be the first traditional cumbia record recorded on tape in Colombia for many years.