Down at the Corner in Fallowfield… 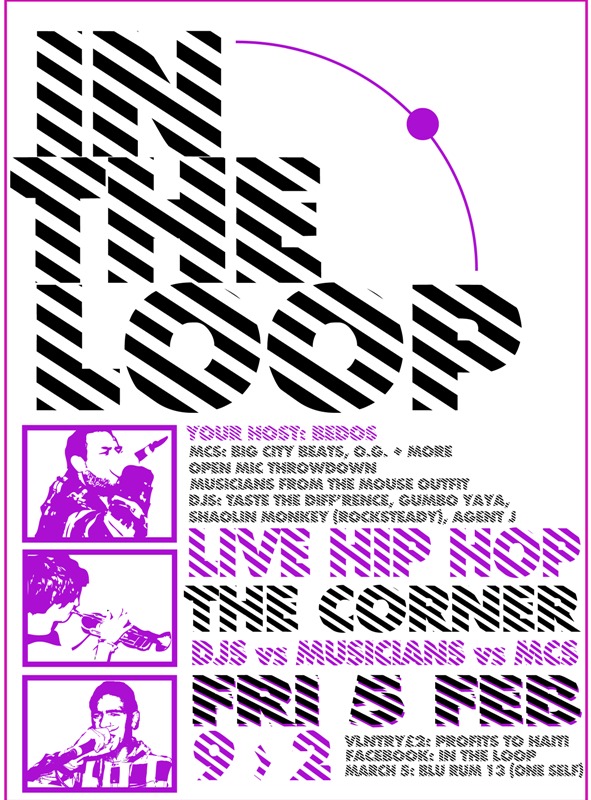 Yes – live instruments meet fresh MCs meet DJs… it must be the return of IN THE LOOP innit! A fantastic response to our first two nights in Fallowfield has meant we are GOING MONTHLY – 5th FEB, 5TH MARCH (with BLU RUM 13 of ONE SELF) and from then the 2ND FRIDAY of the month…

Yeah its been a while, but we are back at the Corner in Fallowfield.
WHAT? is in store? DJs, MCs, and this for In The Loop #3, a live hip hop band for the Open Mic.

***
As always, hosted by BEDOS. Yes, he raps in French.
http://www.myspace.com/bedoshiphop
***
Big City Beat MCs
***
Resident DJs
GUMBO YAYA, AGENT J (Groovement)
***
TASTE THE DIFF’RENCE DJS
The Taste the Difference bar and club nights are bringing some of the sickest international hip hop acts to Manchester in 2010. DJ Format and Souls of Mischief are the first two of the year, and at this In The Loop Stu Bert and Tedious Lemon will be on the 1s and 2s.
http://www.myspace.com/tastethedee

***The Open Mic –
THE MOUSE OUTFIT: The open mic will be a bit different to the last two events, in that the beats will be provided by Adisa, Diego, Chini and Defty, a section of the 8 piece live hip hop band The Mouse Outfit. Some tasty support slots on the CV – Akil from Jurassic 5, The Nextmen, DJ Vadim… the full band will be performing again soon in Manchester with new material.
http://www.myspace.com/themouseoutfit

Listen: Beats from PITCH and FRAMEWORKS

Manchester: Mr Thing spins the final In The Loop cypher

Event: IN THE LOOP // JANUARY

One thought on “IN THE LOOP Part 3: LIVE hip hop this Friday in Manchester”