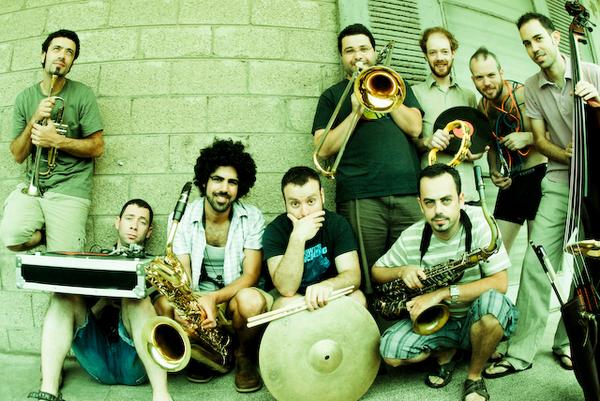 Arriving early in the steel city of Sheffield on a cold November night, I found myself sneaking through the back doors of the University’s Foundry building, which hosts the popular Tuesday Club nights. Home to Sheffield’s “freshest, most exciting, biggest and most credible mid-week night in the UK”, I was fortunate enough to witness the full 9 members of Tel Aviv’s hippest funk band, The Apples, blasting through the motions of a sound check.

The clear view of the stage set up: double bass and drum kit to the left of the stage. The four horns, blowing away in height order to the right, and tucked away behind two mixers and four turntables were the nodding heads of Todres and Schoolmaster, the band’s two DJs.

From this aesthetically pleasing sight I knew that on my return to the venue later to watch the full show, I was in for an utter audible treat.

And a treat indeed it was. The Apples graced the stage shortly after 11:30 and straight away slipped into their tough groove, which Yonadav Halevey, the band’s relentless drummer led, commandeered and dictated throughout the night.

As a group, The Apples are stupidly well rehearsed and therefore tighter than Vanessa Feltz’ swimwear. This was topped off by some beautifully brutal turntable action from Todres and Schoolmaster but also in parts they showed compassion and chucked out some smooth acappellas which flowed at length with the band’s tunes.

The night was finished of by their crushingly tough rendition of Rage Against the Machine’s track ‘Killing In The Name Of’, which was always going to bring out the mosh pit of a funk night, and make everyone smile at each other as they swear, screaming the f word, voices turned up to eleven.

All in all, four hundred and fourteen out of ten, check myspace.com/theapplesmusic for the rest of their tour dates. If sweaty, energetic funk is your vibe, you won’t be disappointed!