Over in Manchester we’re proud to present the Manc leg of this national tour from three UK hip hop heavyweights, at our club night IN THE LOOP. Details of the tour follow! 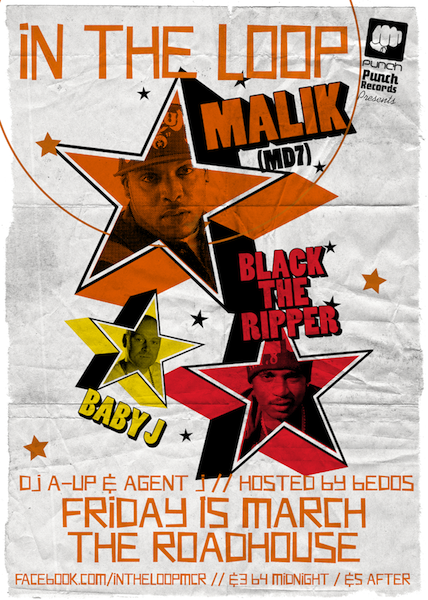 To buy tickets for this event please visit the events page: in the loop: malik {md7}, black the ripper and baby j tickets from Skiddle.

UK rap heavyweights Malik MD7 and Black The Ripper alongside Baby J will embark on a major national tour this February, hitting major cities like Bristol, Liverpool and Nottingham and also performing at a festival in Rotterdam, Holland.

Malik MD7 started his musical journey as a member of the well-established UK hip-hop group Moorish Delta 7. The group reached critical acclaim in 2002 with their first album, The Power and the Glory, which was widely considered a landmark in UK hip-hop.

Since then, he has established himself as a successful solo artist with singles like ‘I’m Ready’ featuring Margs & K-Koke and he featured on the very popular Baby J remix of Amy Winehouse’s‘ Valerie’. This remix then led onto Malik MD7 touring with Mark Ronson’s band and sharing the stage with artists such as Daniel Merriweather, Corrrine Bailey Rae and Rhymefest. Consequently, Malik joined the Mark Ronson and Jay-Z tour, supporting artists like Kanye West.

Malik MD7 has collaborated with the likes of Professor Green, Wretch 32 and Sway. 2013 is a very exciting year for Malik MD7: he is releasing a new mixtape Too Muckin Fuch Volume 2 in February to coincide with the tour and his EP, Malik’s Marvellous Medicine will be released in May.

Black The Ripper AKA Samson is a highly respected and favoured hip-hop and grime rapper from North London. He made his name in the infamous Axe FM clashes, where he beat off numerous opponents consistently.

He sets the levels high with his consistent conscious lyrics and undeniable star quality that he brings to the mic. He has collaborated with some of the grime scene’s biggest names and has released two solo mixtapes, Black is Beautiful and Holla Black.

His music and non-compromising lyrics reflect the environment he grew up in, his lyrics largely a mixture of commentary on issues such as poverty, religion and racism. Despite being signed to his own label and not being playlisted on commercial radio, Black The Ripper has an impressive vast online reach with over 41,000 Twitter followers. He has just recently released a new mixtape called Black Is Beautiful 2.

Well known UK music producer Baby J will be the DJ and compare for this national tour. Since being discovered in 1995 by a Wu-Tang Records A&R in New York, Baby J has worked internationally for the last sixteen years. He has produced music for Plan B, Wretch 32, Dead Prez, Skinnyman and many more well-known artists.

Further information is available at punch-records.co.uk.